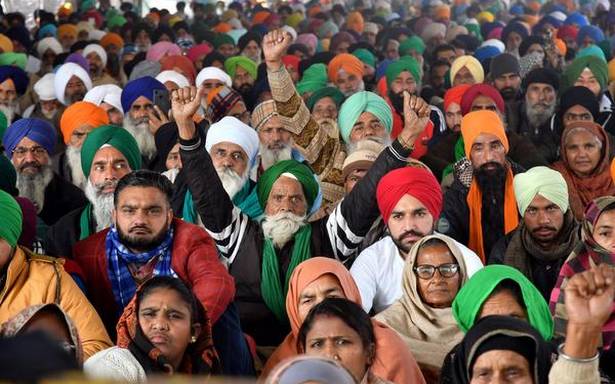 The ongoing farmers’ protest at the Delhi borders has been shot by the Kannada documentary filmmaker, Kesari Haravoo

“The compellingly glaring issue in today’s India is the new awakening of the Punjab, Haryana, Uttarakhand, and Western Uttar Pradesh peasantry and its resistance to the three controversial farm bills, which they term as ‘Black Laws’. The bonding among Sikh and Jat farmers in the ongoing farmers’ movement again proved that peasant-farmers no longer are quiescent, accepting, and fatalistic and passively subordinate,” observes Kesari Haravoo, who is relentlessly shooting the ongoing farmers protest from the past several days with his cameraman N. Praveenkumar in Tikri, Singhu, and Ghazipur borders for his yet-to-be-titled documentary film.

The farmers’ agitation against the Union Government took a different turn after the violence of January 26. Though this dented the credibility of the movement temporarily when farmers leader Rakesh Tikait broke down it regained its momentum.

It is gathering strength with each day and has become an Indian phenomenon with over 100 farmer’s sacrificing their lives and many farmer’s organisations across the country joining hands unconditionally. It has turned out to be a “do or die” battle for farmers’ to get the three farm laws repealed, Haravoo observes.

Haravoo, a National Award recipient Kannada filmmaker, who has made a documentary on the farmer’s movement of Karnataka in 2016, with a focus on farmer’s leader K S Puttannaiah, could not keep himself away documenting the history of awakened farmers, “I am looking at the agrarian crises the country is staring at, through the prism of this historic farmer’s protest,” says Haravoo.

This filmmaker has been connecting with diverse communities in Karnataka and making feature and non-feature films on them in the backdrop of contemporary social, political, and environmental issues. His documentary film, “Wither Gundia” was shortlisted and screened at the UN Conference on Forests, Istanbul in 2013. This documentary delineates on the impact on the irreplaceable biodiversity hotspot-Western Ghats, due to Gundia Hydro Electric Project, which was later dropped by the Karnataka government. Similarly, he did the documentary “Aghanashini and her children”- on the river Aghanashini, which faced threat when NTPC proposed to install a mega-thermal electric project on its estuary. Nearly 18 years after making Bhoomigeetha, Kesari Haravoo, recently made his second feature film, ‘Olleyavanu’ (A Goodman) focused on the socio-economic and political impact of the post-liberalization world on the common man.

Haravoo who is shooting ongoing farmers’ agitation observes that “the ongoing agitation of farmers is greater in scale compared all previous peasant struggles. This protest is different in terms of scale and comprehension and not gloomy like some previous agitations. It is more of a celebration of democracy and the social sovereignty of the people of the country. The sit-in peasants have resolved that they would not return till the contentious laws are brought down. Food and shelter is being offered to everyone. To eat in their langars, listen to Sikh discourses, witnessing Sikhs, Muslims and Hindus holding hands together – all present a picture of their cultural, religious ethos, their resilience, determination, patience, innocence, self-respect, and fortitude,” he says.

He refuses to agree with the city-bred non-agrarian world that brands agitating farmers’ as brawn, emotional, and lacking logical thinking or reasoning. Kesari observes, “Tens of thousands of protesters, who have assembled in Delhi borders are updated thoroughly , who prudently link privatisation, demonetization, and introduction of GST with their deepening agrarian crises. My idea of this film is to understand the implications of these laws on the desired inter-and intra-generational equity factors in terms of social, economic and environmental prospects of India and its people,” he notes.

Kesari Haravoo doesn’t mince words when he says that it would be highly problematic and misleading when one chooses to brand the agitating farmers as urban Naxals or Khalistanis. Such name-calling comes only when you have no clarity, no vision of a prosperous India, but to crush the movement for short-term political gains.

Haravoo released a promo of his yet to be titled documentary https://youtu.be/m5-5sW883H4 in support of the solidarity protest organised by Samyukta Horata (United Struggle) Karnataka, jointly organised by farmers, Dalits, workers, students, and women organisations in Bengaluru on January 26. This promo depicts the ‘humane protest atmosphere’ of the farmers at Delhi and amazing visuals projecting coexistence, warmth, and the hospitality of farmers.

“Farmers of Karnataka did not understand the visions of Prof. Nanjundaswamy. But now, political and economic changes that have been happening in the state, at the centre and around the globe must pull the leaders and the movement out of their disorientation. A new enthusiastic generation must emerge,” he says.

He hopes that the new generation is understanding the way crony capitalism is taking over natural resources for exploitation. Considering the ‘changing climate’, where accumulated anger and frustration is waiting for an explosion says Haravoo.

What happened to Haravoo and his team on January 26? “The battery of our camera was broken while documenting the return of farmers to the borders,” said the filmmaker.