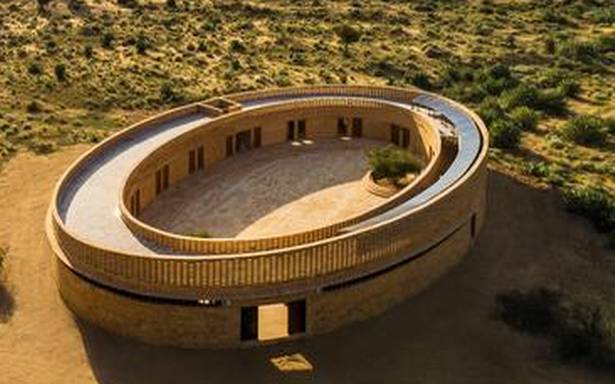 How a girls’ school in Jaisalmer has brought together an architect from New York, local stoneworkers, and the opportunity for a new economic avenue

Rising out of the desert in Jaisalmer is an oval-shaped oasis. Even as sunlight filters through its jalis, it blends into the dunes surrounding it, almost as if it grew out of the shifting sands. Soon it will be ringing with the voices of 400 girls — ranging from kindergarten to class 10 — as the Rajkumari Ratnavati Girls School opens its doors.

Designed by Diana Kellogg Architects, the school is funded by CITTA, an international non-profit founded by Michael Daube. As the New York-based artist, who has close ties to the ‘Golden City’ (known so because of the yellow sandstone used in its buildings), told The Guardian recently, the school is the first of a trio that will collectively become the Gyaan Centre. The other buildings will house a women’s cooperative and an exhibition-cum-performance hall, and a textile museum. “I realised that through an economic avenue, I could entice the [local] communities to send their girls to school,” he said, sharing how the centre will have craftspeople to impart skills such as weaving and printing to the students’ mothers and aunts, and a marketplace to exhibit and sells their goods.

Tales in ajrak and marble

For Diana Kellogg, the project came at a time when, as she told Architectural Digest, she wanted her work “to affect a larger audience, to have a sense of nurturing, comfort and healing”. The architect, with over 25 years of experience, is well-known for her tasteful renovations and luxury residences in Manhattan. She has recently expanded her horizons, with work on education institutes in Nepal’s Limi Valley alongside the centre in Rajasthan. She is designing the latter pro-bono. “I’ve always been committed to issues related to women and girls, particularly in recent years,” she tells me by email from New York. “I’ve visited India over five years, and [been to] many schools. But I mostly got to know the people of Jaisalmer.” So when Daube approached her, she “wanted to use the traditional forms [of the region] in a contemporary way to show that the stone craftsmanship could be used in innovative ways.”

Using the local sandstone and recreating the curved walls of the Jaisalmer Fort, or Sone ka Quila, the scale of Kellogg’s design is sweeping: from the curved terrace and winding corridors, to the walls topped with latticed screens. “At one of the first meetings, we were discussing materials to use. Of course I wanted to use the beautiful local sandstone, but I thought it would be too expensive. However, to every suggestion of an alternate option, the response was the same… stone. ‘We can carve anything out of it,’ they said. And they did,” she states, adding how skilled local artisans made everything from individual bricks to sculptural water-cooler openings in the yellow stone. “When we couldn’t find the right sized sinks for the washrooms, they carved them out of solid stone.”

Having never worked in a desert landscape, or with stone artisans for that matter, she had challenges a plenty. “The issues concerning climate and technique were completely different than anything I was familiar with. I knew I had to work with local building techniques and lime plaster as they have been successfully building monuments for centuries in these extreme climates,” she says, underlining their commitment to sustainability.

Phase two of the project will soon get underway. “We are planning the central building, which will be an arts centre incorporating dance and performance spaces, along with a library and computer facilities. There will also be gallery space for visiting artists. This building will mostly exhibit the textiles of the region, which we’ve been buying from the villagers to help support them during the pandemic. This way, their work will remain in Jaisalmer, for them to visit,” she concludes.