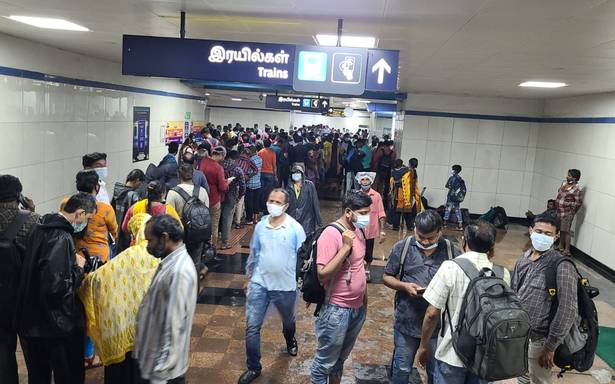 Thousands of motorists and commuters were stranded for several hours on arterial roads in Chennai on Thursday evening as waterlogging induced by sudden and incessant heavy rains led to a gridlock. The city last witnessed such a situation in November 2015.

Some of those leaving offices, took a ‘U Turn’ to return to their point of origin after being stuck for over an hour covering less than a kilometre. Metro Rail stations witnesed unprecedened crowding as people desperately tried to reach their homes.

What started as a cloudy day with drizzle, turned into a intense spell by 3 pm and left several areas including T.Nagar, Mylapore, Teynampet and Nungambakkam reeling under water with MRC Nagar receiving the maximum of 20 cm which was followed by Nungambakkam receiving 16 cm of rain and YMCA Nandanam 12 cm up to 8.30 p.m.. While Meenambakkam got 13 cm of rain, ACS Medical College weather station received 10 cm of rain.

The city will experience rains for another four days till January 3, the Meteorological department has said. While the sky condition will be cloudy, there may be thunderstorm with light to moderate rain in some areas, the department has said. Though there was a forecast there will be rains, no one expect this quantum of rains, say weather bloggers.

S. Balachandran, Deputy Director-General of Meteorology said, “The interaction of the easterly winds at lower level and westerly winds at upper level has brought rains to the city. We had given a forecast that city will get rains. The rains in the city will continue till January 3.”

Puviarasan, director, Area Cyclone Warning Centre said, the unexpected fast movement of the easterly trough over Chennai coast gave Chennai the instense rainfall on Thursday. “This is a highly localised event and it is very difficult to predict such short heavy spells of this intensity usually.”

Expressing surprise over the quantum of rainfall, weather blogger Pradeep John said, “We can call this a cloudburst. The rain rate was amazing. We received close to 10 cm in an hour,” he said.

Another weather blogger K Srikanth said, “There have been such episodes in the past too. In November, we saw the city recieving 20 cm of rains. Similarly, a few years ago, Taramani got 10 cm of rain. At least in November, we had a few weather models that did predict such heavy spells, but this time, no one saw this coming,” he said.

As far as the State is concerned, the meteorological department has said, on Friday, there will be thunderstorm with heavy rain at isolated places over Cuddalore, Villupuram and Mayiladuthurai districts, Puducherry and Karaikal and also thunderstorm with moderate rain may occur at many places over rest of Coastal Tamil Nadu districts and a few places over interior districts.

R Srikanth, another weather blogger said, 2021 was quite a different year when compared the 2005, 1996 or 2015. “This year there were few episodes to sharp intense short spells which made a huge difference unlike the previous years. We have to know that the city had excess rainfall in the first half and last half,” he added.