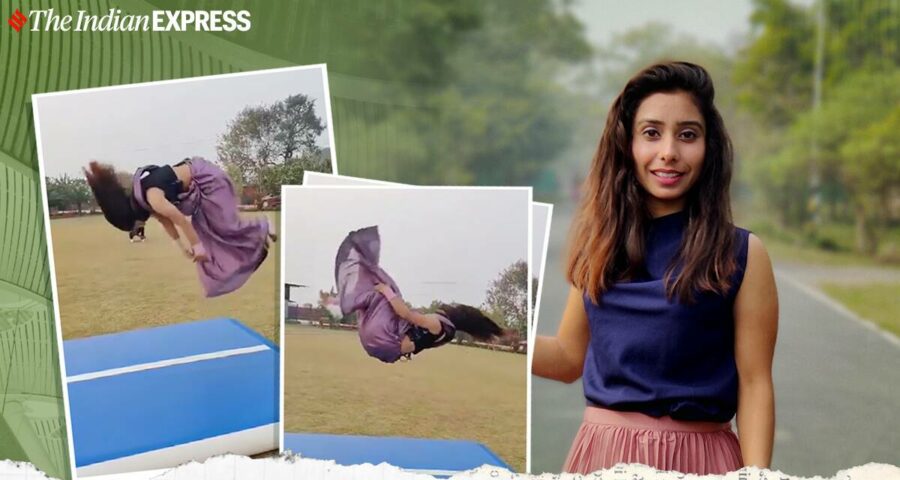 "Have already done many videos in sari. Next, I would like to try with a lehenga," says the 24-year-old gold medalist 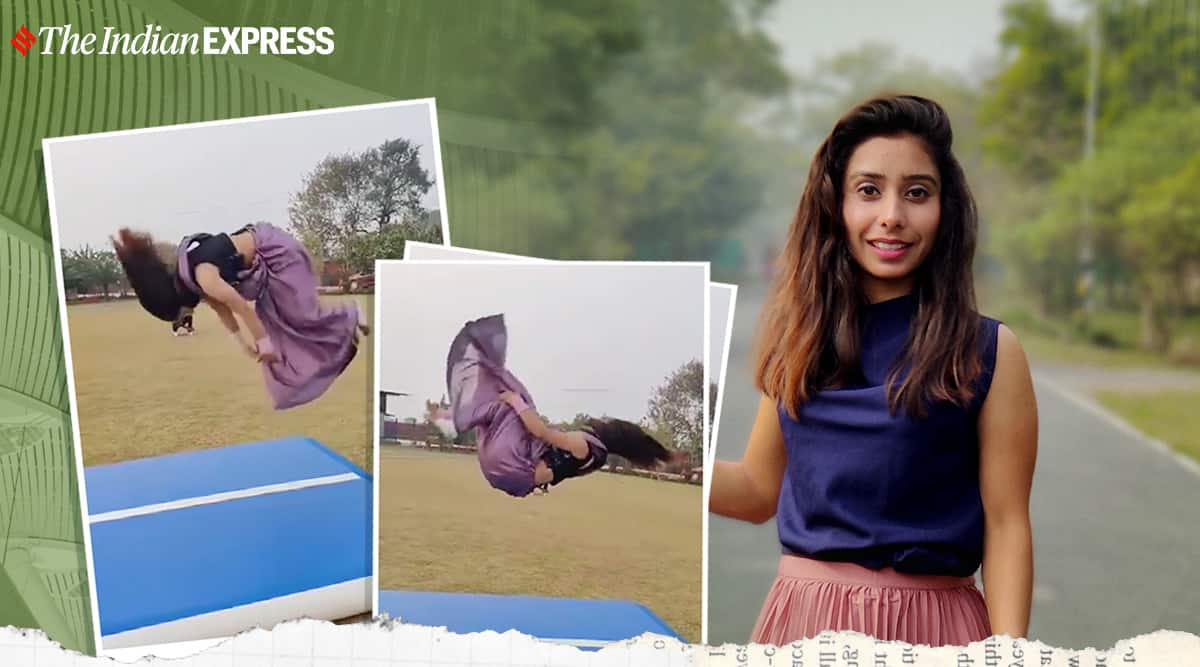 During the nationwide lockdown, a video of a woman performing back-flips on a mattress went viral. Why? She was doing the stunts in a sari! Captured in a slow-motion format, the video made her an overnight sensation; it garnered a million likes and innumerable shares. The gymnast, Parul Arora, became unstoppable.

Fast forward to January 2021, and another video of hers is being widely shared on social media. In it, she is seen in a purple sari and an embellished blouse, flipping in glory and wowing her 140K followers. In conversation with indianexpress.com, the 24-year-old gymnast talks about why she chose to perform her stunts in a sari, her future plans, and how she continues to stay relevant in an ever-so evolving space.

When did you start gymnastics and was it always a part of your plan?

Thanks to my father, I was introduced to gymnastics at an early age. I remember, when I was seven years old, he took me to the stadium, and there I witnessed the gymnastics apparatus and several children performing. Watching them was exciting for me and that is when I began coaching.

Did you want to send out a message for wearing a sari and performing the stunts?

These stunts aimed to highlight that people are constantly judging others based on what they wear, especially in the case of women. I wanted to break such stereotypes and highlight that clothes do not matter and define who we are.

Not only that, performing gymnastics goes beyond me trying to break these notions — for me, it is also about fitness. I wanted to showcase to the community that anyone can achieve anything with the right approach, guidance, and hard work. In other words, the possibilities are endless.

How long did it take for you to perfect the sari stunts?

Since I have been a gymnast for the last 15 years, performing the stunts was not a major challenge. There, however, are some important elements, such as running with speed, which was slightly difficult with the sari. I did trip a few times, as the sari came in between my legs. I did not sustain any injuries and was able to find my way through performing it easily.

Other than saris, which other attire would you want to experiment with?

I would like to try something new. I have already done many videos in sari and dresses. Next, I would like to try with a lehenga. Apart from that, I am working on exploring more exciting concepts that can create a meaningful impact as well as inspire people.

How did the idea of performing in a sari come to you? Can you also share some tips on how to nail it?

It was one of my friends, Hoshiyar Singh, who helped me with this idea. We thought about the stereotypes around the clothing of women as well as challenges around managing a sari, and came up with the videos.

The only tip I would like to give is that one should try such stunts only after achieving some level of training and it should be done always under the guidance of an expert to avoid injuries.

Everyone knows that you are gymnast, is there any other profession you pursue on the side?

Yes, apart from being a gymnast, I am a personal training coach with FITTR. My area of expertise includes strength and conditioning. Being a gymnast, fitness is one of my passions and I decided to carry on with my coaching because of its philosophy of democratizing fitness and sharing knowledge with as many people as possible. But, most of all, it allows me to pursue my passion as a career. I am more than excited to see where this journey will lead me.

How was the lockdown for you and what are your plans for the future?

During the lockdown, I got ample time to think about the impact I want to make with the content I am producing. It also allowed me to brush my skills further and work on the content in a more structured manner. Earlier, I did not get enough time to work on such interesting concepts, as the weekend — precisely Sunday — was the only time available.

For the future, I plan to work towards opening my academy and train a new generation of gymnasts. In addition to this, as a PT coach, I want to help people achieve their fitness goals and continue my work around developing interesting videos to inspire people.