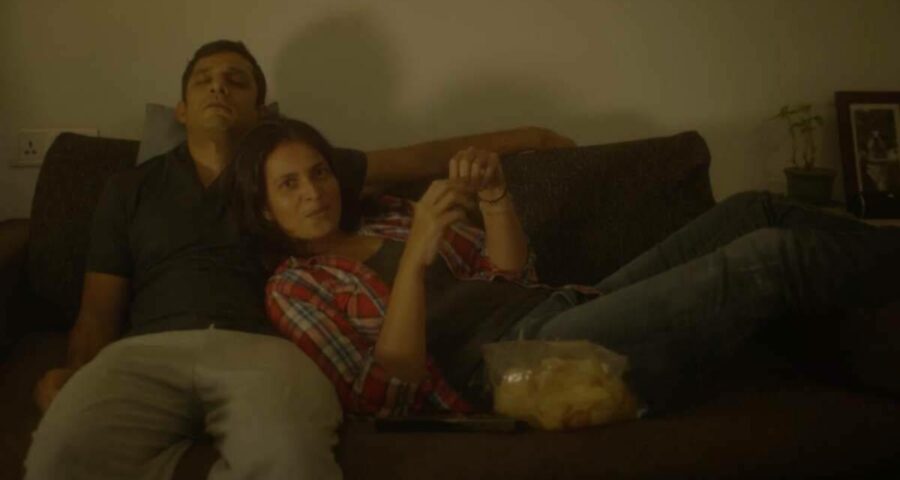 In Atul Mongia’s Awake, a woman comes home to her waiting husband. By the time she is back from work, he is already in bed. There is an ease with which it unfolds, quietly suggesting it’s a regular affair. Her husband is comatose. The brittle dignity accorded by the medical term falls apart when seen in person. His dependence on her, so uncomplicated and obvious, is heightened by his unawareness of it. She fixes his hair, smears a little cake on his mouth on their anniversary. She kisses him goodnight. The 23-minute short explores her life which, in textbook terms, is unambiguously tragic.

Sameera (Ishika Motwane) is a successful photographer. She guides couples from behind the camera, telling them how to hold each other. She is trained to evoke companionship, and on her part knows how to sustain one. She returns to her husband unfailingly. She meets her friends with him. She celebrates their marriage with him by her side. This is a curious arrangement, one where the woman is prone to be treated either with pity or scorn; her life open to be judged as moving too slowly or hastily. But Mongia’s twisted and ingenious short resists such obvious reading. Instead of focusing on them, it centers on her. And by doing so, the seeming dysfunctionality of their marriage serves as a critique of the functionality of marriages.

His role in the arrangement — passive, stripped off a choice — is acutely familiar. The husband’s peripheral presence evokes the central existence of wives in marriages. The short is aware of this amusing irony. At one point, he keeps sitting on a chair while she gets ready to go out. In another instance, Sameera shares her work details with her friends as the husband participates mutely. Mongia milks the underlying irony to the hilt when the female friend on the table urges Sameera to not let go of a professional opportunity because of the present situation and the other man cuts in to remind the husband has no say.

But this gender swap narrative is undercut by Sameera’s genuine care for her husband. She treats him tenderly, engages him in her activities, guards his condition from strangers, watches television with him. As if she is readily selfless. On the surface, this is her dispensing spousal duties, but Awake stresses it is more than that. The constant smile playing on her lips — Motwane does wonders with her face, always alert, smiling before hardening to a scowl — signals her joy in this arrangement. And through this willingness, Mongia uncovers the central idea of his film: the selfishness of caregiving.

Caring fundamentally is a selfless act. It also hands over the reign of control. As the film progresses, we learn the middle-aged Sameera used to be the life of a party. She could out-drink any man, her friend reminds her. And yet flashbacks from her marriage depict a different her. At one point, we see scenes from a party, a different one. But this time, it is her husband who has the center stage as she quietly looks on. In another snippet from the past they are driving back home. He informs about a new job offer he is planning to take up and, in the same breath, asks her to relax, enjoy her life. These are subtle references but the implication is clear: the marriage was about him. That though they were partners, they were not on equal footing. That it was his story and she was a bystander. This present situation, however morbid, enables her a sense of control. Caring for him sanctions her to take charge of her own life.

In many ways, Awake is reminiscent of Kislay’s Aise Hee (2019), an affecting film uncovering a widow’s new joy of living post her husband’s demise. In both cases, their partners are not pilloried as evil men. But that their absence, to whatever extent, can be liberating goes on to show emancipation for women is fortune at best and negotiation at worst.