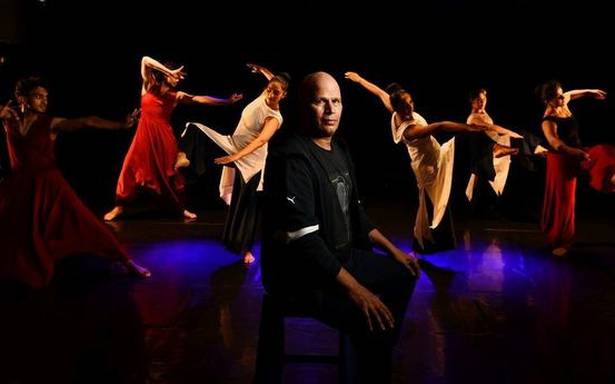 The 10th edition of the Attakkalari India Biennial showed how dancers can explore space, time and emotion

“It’s Attakkalari Centre for Movement Arts. If you say dance, people tend to have pre-conceived ideas, that there may be anklets, make-up and costume; for some others, it could mean tutu or ballet. I wanted to put movement at the centre,” says Jayachandran Palazhy, founder and artistic director of the institution.

Be it ‘Purushartha’, where they collaborate with Kunihiko Matsuo, music director and digital artiste from Japan, or ‘Chronotopia’, inspired by a story from Silappadikaram, Attakkalari’s dance productions search for a new syntax.

The performers here are thinking artistes who want to create art and not those who are only aspiring to perfect technique. Take, for instance, the centre’s latest production, ‘Sthavara-Jangama’, which premiered at the recently concluded 10th Attakkalari India Biennial in Bengaluru. It combined multimedia screenings with live performers who depicted the treks of the migrant labourers during the pandemic. The production brought together minds that resonate with modern sensibilities, and bodies that express instinctively and imaginatively.

Digital technology has been a hallmark of Jayachandran’s works. “Digital arts allow non-linearity, and much more interactive possibility in a way that reflects our times. But I must stress that the body is still the centre. Over the years, to underline this I ensured that the Biennial presented many genres of work. Over the years, I have seen audiences become more sophisticated and ask more pertinent questions.”

A young physics graduate from Thrissur, Jayachandran learnt dance as a pastime while juggling an active sports life as an athlete and badminton and cricket player. A student of Mohiniyattam exponent Kalamandalam Kshemavathy, he moved to Chennai to train in Bharatanatyam under the Dhananjayans, and joined Kalakshetra as a part-time student to learn Kathakali.

He did not limit himself to dance, and moved to Kalaripayattu and contemporary theatre as well. “Since everybody was using a traditional vocabulary, I was keen to find one to approach contemporary themes.” That’s when he saw the work of Merce Cunningham, considered the most influential choreographer of the 20th century, and was left feeling intrigued by his abstract language. He studied in London Contemporary Dance School, and soon established a dance company in London.

“I travelled to different parts of the world to experience working with different people; I interacted with some of the best theatre directors, such as Peter Brooks and Ariane Mnouchkine, and choreographers such as Pina Bausch and Trisha Brown. I had a chance to see their works. These experiences and my own exploration in trying to create a contemporary language, taking inspiration from Indian traditions, were my starting point. Being away from India gave me a chance to objectively analyse tradition and then chart my own course,” he says.

Back in Bengaluru, Jayachandran realised he needed inputs to think of choreography and movement in his own way. Attakkalari Centre for Movement Arts was set up in 1992, to come up with original, experimental work. His idea was to demystify contemporary dance and make it accessible to all sections.

This edition of the Biennial again proved to be a movement lab that adapts to the reality of the times, envisioning new futures for post-pandemic performance cultures.

It featured an array of interdisciplinary movement works, with multimedia and digital art at the centre. There were screenings and discussions around the works of Australian choreographer Garry Stewart, and a special set of dance films, courtesy the Belfast International Arts Festival, which collaborated with the Biennial for the first time this year. One of the novel, cutting-edge works this year was CyberBallet, an interactive installation by Cyber Räuber, a Berlin-based VR Theatre. It captures the movement of the dancer and then, with AI, interprets it in the virtual space. With a VR headset, viewers can partake in the performance.

As much as he emphasises body and breath, Jayachandran emphasises technology too. Not in a way that it replaces the tangibility of physical performance, but “by not shying away from the inter-connected world.”

As he says, “This new reality is about finding a sense of equanimity. It’s about sharing our experiences, memories and imagination. And technology will play an important part in facilitating it. You should not be a slave, but must be able to use it in a measured way to express what you really believe in as a sensitised and caring human being.”

The writer is a theatre practitioner.