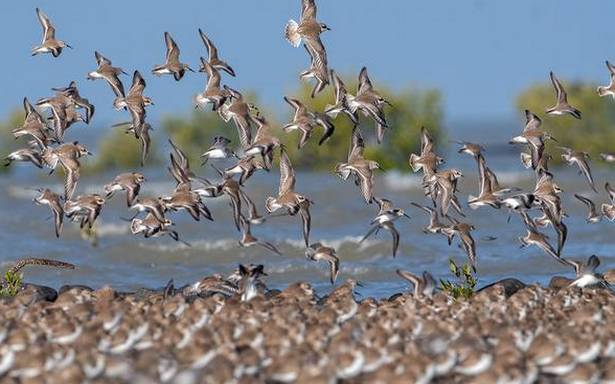 Our seasonal guests have landed, in millions, after marathon flights across continents. Birds from 29 countries fly to India every year at this time, an annual ritual signifying the beginning of migration.

The stint, a bird that weighs just about 20 grams, makes an astonishing journey covering 8,000 kms from Siberia to Tamil Nadu’s Point Calimere. Forested areas of the Indian Peninsula are aflutter with warblers, a wispy olive green bird, that fly thousands of kilometres from the mountains of Central Asia. The bar-tailed godwits, after spending their summers in Russia, will soon embark on a long non-stop flight to spend the winters at shallow water bodies in Pulicat and Sholinganallur.

As daylight shrinks and food supply dwindles at the breeding sites in the northern hemisphere, birds start migrating towards wintering sites in the South. “It’s a natural process of survival. They take nine flyways across the world and some unusual routes during this flight,” says S Sivakumar, scientist at Bombay Natural History Society. He adds, “The Central Asian Flyway covers 30 countries including India. The black-headed, brown-headed and slender-billed gulls have arrived, mostly from Europe and Central Asia.”

In Chennai, wader birds are among the first ones to arrive, and can be spotted around Pallikaranai, Sholinganallur marsh, Kelambakkam, and Pulicat. “Wood sandpipers are the most common, followed by Common Sandpipers, that can be identified by the clear C shaped marking in white, near their wings. These birds wade through shallow waters, and have arrived in hundreds, like every year,” says Aravind AM, a birder in Chennai.

Our special guests can easily be spotted perched on trees or at a wooded area, says Ashvin Viswanathan of Bird Count India, Bengaluru. Bird Count India supports listing and monitoring of birds across India. “Grey wagtails have arrived. I saw a blue-tailed bee eater (that breeds in North and central India) calling and migrating while heading South. Most birds migrate in the night. When you go to a forest patch or a garden in the morning near your home, you will see a new bird every day as it rests there after flying all night,” he adds.

During winter, one we see flocks of swallows either perched on electric wires or making super rapid circular flights, not just over water bodies, but even over busy traffic roads in many parts of Chennai. “Not many realise that these are migratory birds which have come from as far as Europe and Central Asia. Small dull brown birds called warblers and species like Blyth’s reed warblers and booted warblers can be seen around bushes or trees around our homes even in busy neighbourhoods,”says Aravind.

Many birders have observed unusual sightings. For example, Amur falcons made a stopover in Pune in huge numbers in January, and the red-necked phalarope, a pelagic bird showed up at Uppar Dam in Dharapuram, a non-coastal area during the last week of September. Birds have a few favourite places, says Ramakrishnan Aiyaswamy, a wildlife photographer in Bengaluru. “They choose their place based on the availability of food and how long they can stay there. They also have a plan B, and choose another water body in the nearby area if their original habitat is disturbed.” As long as the birds keep up the date with migration, birders are happy as it indicates healthy environment and a safe habitat.

“In Tamil Nadu, we spotted European bee-eater near Ponnuthu Hills in Coimbatore. Though it was considered a passage migrant, recent studies and regular monitoring at Erode and Salem have proved that one population of bee-eaters are wintering in Tamil Nadu,” says K Selvaganesh, a birder and teacher at Valparai near Coimbatore. “We are waiting to meet the brown shrike that comes from Mongolian region. Every year, we see two birds at our school campus in Valparai. It arrives by first week of October. We see more than 30 migrant species here during the migration season.”

During this time, some birds called passage migrants, like the European roller, rufous-tailed scrub robin, and common white throat, migrate through Rajasthan, Gujarat and other parts of the Indian Peninsula to cross the Arabian Sea. They move to Africa by mid-October to spend the winters there. “This time of the year is fascinating for bird watchers as a number of incredibly beautiful birds pass through the Indian subcontinent on their way to somewhere else. Birders in Delhi can now see the greenish warbler (from Europe), Blythe’s reed warbler (from Europe and Russia) and rusty-tailed flycatcher (from Kashmir and Himachal) passing through as the birds are heading southwards,” adds Ashvin.

The common stonechat, a chunky little bird from Siberia and Turkey, has arrived in Delhi, says Col Pankaj Sharma (Retd), who runs Indian Birds on Facebook, the largest online community on birds in the Indian subcontinent that has 2.7 lakh members. “The bar-headed geese, northern shovellers, and pigtails from the ducks family will be arriving early as the wetlands are already full because of rains in September. I am waiting for the endangered steppe eagle to land from Europe. These birds can be sighted at Aravalli Range of Gurgaon, and in areas around Jhajjar district in Haryana.” Aseem Kothiala, a wildlife photographer in Mumbai recorded the red knot at Jamnagar. “ It breeds in Siberia and travels up to 16,000 kilometres twice a year. Right now, one can see white-winged terns in Mumbai. In Kutch and Ahmedabad, species like rufous-tailed scrub robin, red-tailed shrike, red-backed shrike, European roller, European Nightjar and a few others can be spotted. The reverse migration takes place from January onwards,”adds Aseem.

Though birds have been carrying on these long trips for millions of years, Aravind says one can spot small changes in trends through eBird database and through sites like Migrant Watch. “Siberian Cranes, which are critically endangered, used to visit Bharatpur Sanctuary about 20 years ago, but we don’t see them now because that population which visited India seems to have gone extinct.”

Agrees Ashvin, who has put together animation maps on migration based on data uploaded on citizen science platform eBird. “There is suspicion on how birds might be reacting to shifts in climate. Bird species like yellow-browed warbler and Richard’s pipit migrated to Northeast India, East Asia and Southeast Asia. Now, they are landing in western Europe in a new migratory route. There is a documented change in pattern.”

Researches track birds using satellite tags and that reveals knowledge on individual birds and their migration routes. “We ringed northern shoveller at Manjeera Wildlife Sanctuary in Telangana, and tracked its flight all the way to Russia,” says Sivakumar and adds, “Migration is a long, exhausting journey. Global warming is real. Rains are inconsistent. Wetlands are drying up. At the world level, some changes have been noticed among the breeding ranges of birds already. We have to conserve our wetlands to ensure that food is available for the visitors. They can gain weight and fly back to their breeding ground on time and bring a healthy offspring.”