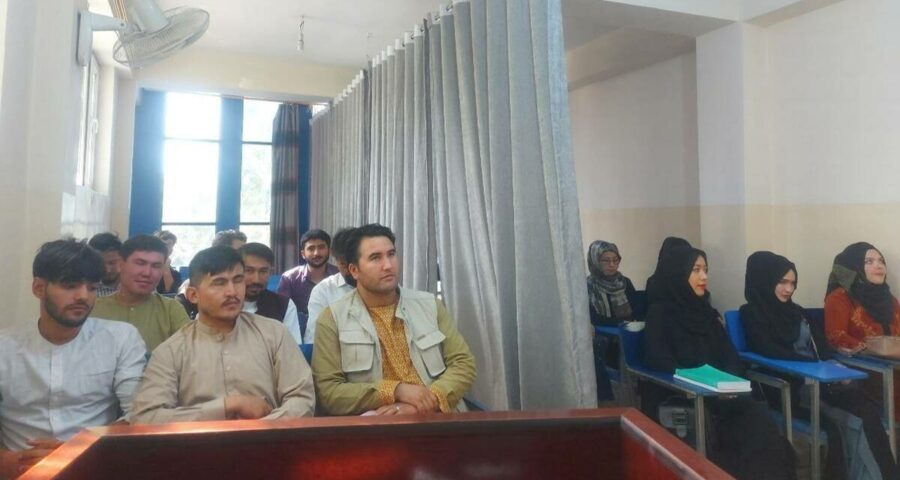 There are nearly 12,000 women studying in Kabul University and 1,000 in Kandahar University, including 300 from other provinces accommodated in the dormitories. Curtains bisecting rooms “like in hospitals”, cubicles with curtains fitted with jaalis, and separate shifts for women and men. More than a month after the Taliban took over Afghanistan, these are among the elaborate plans drawn up by prominent public universities to implement the new regime’s gender segregation policy.

In the absence of any clear roadmap from the Taliban regime on the future of women’s higher education, public universities in the country such as Kabul University, established in 1932, or the three-decade-old Kandahar University — with 26,000 and 10,000 students respectively — face an anxious wait. There are nearly 12,000 women studying in Kabul University and 1,000 in Kandahar University, including 300 from other provinces accommodated in the dormitories.

Many private universities with fewer students have resumed classes.

For now, most universities have proposed that women be allowed to attend classes from behind curtains or cubicles, or transferred to institutes in provinces they come from.

“Our plan is to hold classes separately for men and women wherever more than 15 women are in one class. To do this, we plan to introduce shifts: morning and afternoon. If there are less than 15 women, we will purchase dividers, as they use in hospitals, to separate men from women in the classroom,” said Khairuddin Khairkhah, chancellor of Takhar University, which was established 30 years ago.

The Kandahar University chancellor said the issue has been deliberated upon in the institute’s academic council, following which a plan was forwarded to the government, including a request to allow transfer of women students to institutes in their own provinces.

“We have proposed this since some of our women students have expressed interest in getting transferred. But for those who want to continue classes at Kandahar University, we will create a corner inside the classroom that is separated by a curtain. These two or three or four women can sit in this corner, behind the curtain and we will sew some jaali (a patch of net) of about 30 to 50 cm in measurement in the curtain so that they can see the teacher, the class and the board through it,” Wasiq said.

Like Takhar University, for classes with more than 15 women, Kandahar University has proposed to call students in shifts — morning for women and afternoon for men.

But implementing the proposals will put a strain on the finances of the cash-strapped institutes, some of which have not been able to pay salaries to teachers since Kabul fell to the Taliban. For now, Kandahar University has sought roughly $6,200 from the government, Takhar University $19,000, and Helmund $12,000 to introduce the segregation measures, and for classroom furniture.

Undergraduate education in Afghanistan’s public universities is free. Students are not charged any tuition fee, and those living in hostels and dormitories are provided free food and lodging.

Meanwhile, a recent development at Kabul University has deepened worries that the Taliban administration’s approach leaves very little room for institutional autonomy. A source in the university said the Taliban sacked its chancellor after the institute sought some flexibility in implementing the gender policy, such as permitting women to sit in separate rows where putting up partitions appeared impractical.

“Kabul University runs around 560 programmes and has around 250 classes. We had told the government (before the new Chancellor’s appointment) that splitting up classes and teaching women separately is not immediately feasible. It’s not possible to carve out separate spaces (for women) for everything. How do we do that for libraries and laboratories? Also, there is an expectation that women should only be taught by women. Female teachers make up about 20% of the 900 faculty of Kabul University. How can 170 to 180 women teachers teach almost 12,000 female students? Splitting up classes means doubling teaching hours, so we need twice the number of faculty members,” the source said, adding that the university, in its plan to the Ministry of Higher Education, had suggested “gradual implementation” of the gender policy.

The Kabul University source said the Taliban, in its response to the proposal, reiterated the need to strictly enforce gender segregation. It has also asked the university to consider shifting women students to their local provinces if it cannot hold separate classes for men and women under the present circumstances. “But Kabul University has its own curriculum. So moving students to other institutions is not feasible,” the source added. The Indian Express could not reach the new chancellor, Mohammad Ashraf Ghairat, for comment.

The Kandahar and Helmand University Chancellors, however, said there is no ban on men teaching women.

In the case of relatively newer universities such as Helmand and Nimroz Higher Education Institute, the challenges in enforcing the diktat are steeper due to the smaller presence of women — both students and teachers — on the rolls, as well as infrastructure constraints such as lack of classrooms and, in some cases, a permanent campus.

Helmand University Chancellor Abdul Rahman said, “Holding classes in two separate shifts for men and women doesn’t work for a university like ours since we have 235 women and over 2,000 men. We cannot accommodate all male students in one shift with just 23 classrooms. We have 107 teachers, all men. Our classrooms are still under construction. Since we don’t have enough classrooms to teach women separately, we have proposed to the Ministry of Higher Education to gradually implement the separation plan over five years. By then, we will find enough lecturers. Finding classrooms is the first challenge and finding enough lecturers is the second problem for our university.”

Rahman added that as short-term arrangements, the institute has sought funds for putting up partitions, apart from suggesting separate entry and exit gates for men and women.

At the Nimroz Higher Education Institute, which has 700 students, since there are only 10 classrooms, classes are held in two shifts. Mohammad Qasam, its Chancellor, said the permanent campus is being constructed. “To separate men and women, Nimroz University has proposed holding classes for women in the morning shift and men in the afternoon,” he said.