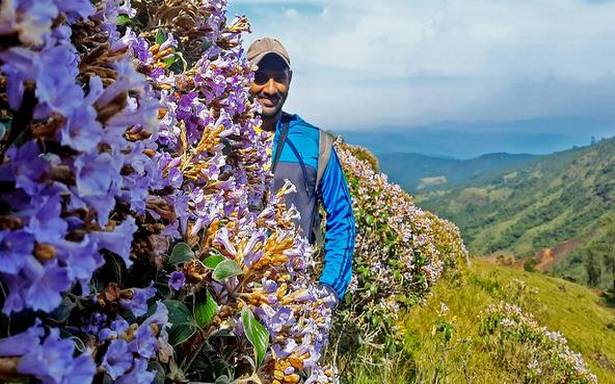 It has been over nine years since restoration ecologist Vasanth Bosco set out to restore the rolling grasslands and the clumps of stunted evergreen trees with dense canopies — the sholas — in the upper reaches of the Nilgiris.

The researcher has now released a song ‘Wanna hear you sing’ on various platforms including YouTube, Spotify and Apple music. “I worked on this song during the lockdown . During my long walks and bicycle rides in the forests, I have been thinking about the natural spaces and what they had been subject to over the couple of years. It inspired me to come up with this song.”

While he penned down the lines and came up with a tune, his friends Arjun Cheyyur and Vijji Cheyyur worked on the instrumentals, mixing and arrangement. The music of gurgling streams and chirping birds transform you to a forest before the song begins. Parts of the song are tied to the episodes of massive landslides that washed away thousands of old growth shola trees in the Nilgiris, and caused huge gashes in the grasslands here, and likewise in many other parts of the Western Ghats. “Nature heals itself, but it takes hundreds of years and this can have a drastic affect on our lives. In general, the song is about damages caused due to climate change and habitat destruction, and the need for change.”

Bosco, who has been collecting and nurturing native shola and grassland plant species, has a unique nursery in Udhagamandalam where he grows as many as 12 varieties of native grasses and other native shrubs like kurinji and balsams. “We introduce these native grasses at various sites in the Nilgiris, currently in an area close to 200 acres, to restore the lost grasslands.” He is also the author of a book Voice of a Sentient Highland (Partridge Publishing India) on the Nilgiri biosphere .

The grasslands are a thriving gene pool, a biodiversity hotspot, he says. The Nilgiris grasslands alone has as many as 600 native species of plants, including medicinal plants. It forms fodder for large herbivores that populate the Western Ghats. The sholas act like sponges and retain water and play a major role in conserving water supply of the Nilgiris’ streams.

“Before the British arrived, more than 70% of the native ecosystem comprised grasslands while the native sholas constituted 30%,” says Bosco. “Once they started planting tea and exotic trees like wattle and eucalyptus, it wiped out the native grasses. Now, we are left with just 9% of grasslands.” He works with all stakeholders, including the State Forest Department, the District Collector and farmers, and encourages people who own lands to grow native plants. “I also engage myself in eco-tourism activities. It’s time tourists are aware of how the ecosystem thrived earlier and its current state.”

Grasslands are a sophisticated bed of plants, says Bosco as he draws your attention to studies that speak of how this ecosystem evolved around the same time as human evolution. “Studies show that it’s the dense grasslands that forced our ape-like ancestors to leave the branches of trees and begin running on the ground using two legs. Grasslands can withstand erratic weather conditions and so many life forms are dependant on the habitat. It is useful in combating fire, frost, and can easily regrow.”

The ecologist has reached out to 17 schools in the Nilgiris. At the 700-acre campus at Lawrence School in Lovedale, he has helped restore grasslands along with students. “In schools where space is a constraint,we take them to our planting programmes at other sites. Climate change is real. Children should be aware of the consequences. We want to have an integrated approach and heal the land. It is crucial.”

You can visit his Instagram handle @vasanth_bosco to know more