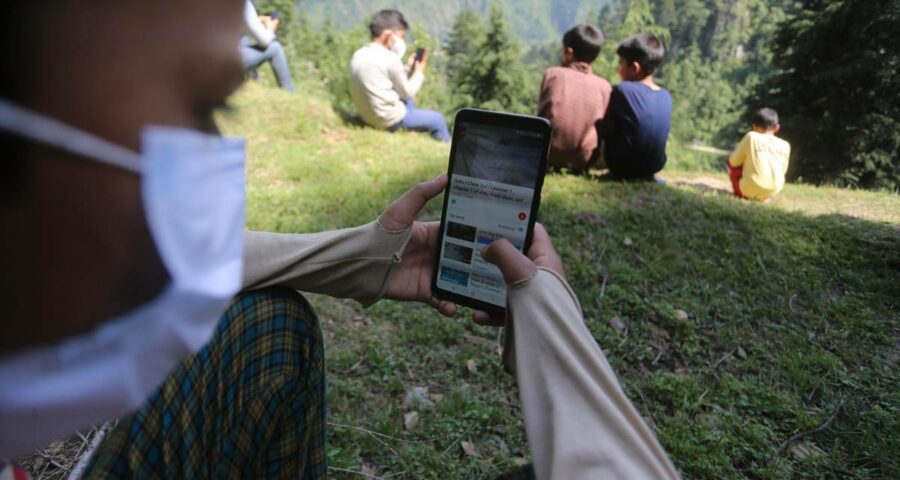 For the children from a village of around 650 households, that small patch is an oasis where they study, socialise and even log in for exams. EVERY WORKING day, school teacher Manzoor Ahmad Chak walks 3 km from his village, then turns to climb up a hill for about a kilometre. That’s when his smartphone gets connected to the network so that he can upload the lesson plan for the day on the Learning Management System portal of Jammu & Kashmir’s Education Department.

With him are students from government schools in the area, who settle down on a patch of grass nearby, waiting patiently for their classwork to download on their parents’ phones. The network is never good enough to attend online classes but they hope to at least see the chapters being read so that they can follow up at home.

“My struggle to get an education is now the struggle of our children,” says Chak. The high school teacher and the students are residents of Baramulla’s Limber, a village just 90 km from Srinagar, across the Jhelum and up a hill where the road is still being constructed — and even a landline is yet to arrive.

For the children from a village of around 650 households, that small patch is an oasis where they study, socialise and even log in for exams. “The area has some wild animals… brown bears have been spotted. We cannot send our children here alone, we don’t allow them to come here after 6 pm,” says Sajad Ahmad, a Limber resident who has accompanied his son.

“Even within the village, people still go from house to house to stay in touch. About 20 per cent of the population migrates temporarily every year to provide education to their children,” says Ahmad, who was part of the team that conducted the 2011 Census in the village.

Chak, who has been teaching since 2007, says that with schools remaining shut amid a string of Covid restrictions, his students often drop by his house for notes.

“In a small village like this, I have to teach them all subjects. There is a secondary school and three middle schools in the area, apart from primary schools. All students have to move out after Class 10 to neighbouring towns to finish school, and the District Headquarters to pursue college,” he says.

“It is Rs 70 one way in a jeep to Baramulla. With money for food, etc., it comes to about Rs 250 to attend a day in college. This is a lot for the low-income families here,” says Chak.

But then, those who can afford to move out encounter a different set of problems.

Aqib Hafeez, a 20-year-old B.Tech student at Kurukshetra University in Haryana, says that when he first left, he could barely bring himself to talk to his classmates. “There are a lot of adjustment issues, apart from language. I have to work extra hard to keep up because we never had access to the technological tools that others had,” he says.

Hafeez appeared for his exams online from a rented room at Baramulla where he paid Rs 2,000 to stay for four days to prepare with a steady Internet connection.

Rouf Ahmad, an 18-year-old who has cleared Class XII, says it takes him four days to download one class. Arveen, a 14-year-old, aspires to become an IAS officer but says she has “learnt to curtain her ambition because we can’t compete with the outside world”.

Connectivity, of course, is not just an issue for students.

Many residents point out that they have not been able to access their Covid vaccination certificates. “Many in the village, especially elders, have been vaccinated. But since there is no access to the Internet, no one will be able to show you a certificate,” says Mohammad Hameed Khan (43), a local resident.

Tasleem Arif, a civil contractor, says that with no ATM in the locality, he has to “keep a day aside every week just to go to the bank”.

Records show that Limber is among over 150 villages in J&K that are still without effective mobile network access with officials citing difficult terrain and remote location as the key reasons for the digital gap.

When contacted, Baramulla Deputy Commissioner Bhupinder Kumar said: “The issue (in Limber) had not been brought to my notice. Now that it has, I will have it checked.”

Back inside his room, Chak goes to the window sill, painted sky blue, and puts his smartphone down. “It can sometimes catch one bar of signal here,” he says. But this time, the bars remain absent and the screen does not light up.