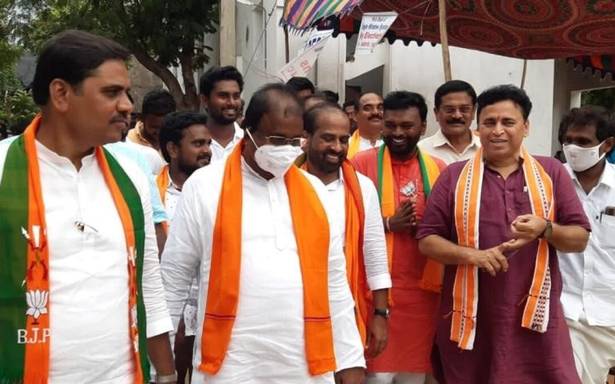 The by-poll election will be held on October 30.

Seventeen candidates, including Yuvajana Sramika Rythu Congress Party (YSRCP)’s Dasari Sudha and Bharatiya Janata Party (BJP)’s Panathala Suresh, have filed their nominations for the by-election in Badvel Assembly constituency which will be held on October 30, 2021.

Ms. Sudha is the wife of YSRCP MLA Gunthoti Venkata Subbaiah, whose death necessitated the bypoll election, while Mr. Suresh has been a youth leader in the BJP for a long time and had unsuccessfully contested in the 2019 election for the Railway Kodur Assembly seat.

Another candidate M. Siva Krishna has filed the nomination on behalf of the BJP. Two Congress candidates namely P. Mary Kamalamma and J. Prabhakar have also joined the race.

Apart from them, there are seven independent candidates in the fray. Friday was the last date for the filing of papers.

The Telugu Desam Party (TDP) and Jana Sena Party (JSP) have opted out of the race. They said that it has been a tradition not to field candidates in elections being held due to the demise of a sitting MLA.

But, the BJP, which is in alliance with the JSP, thought otherwise. They believed that staying away from the bypoll would encourage ‘family politics’.