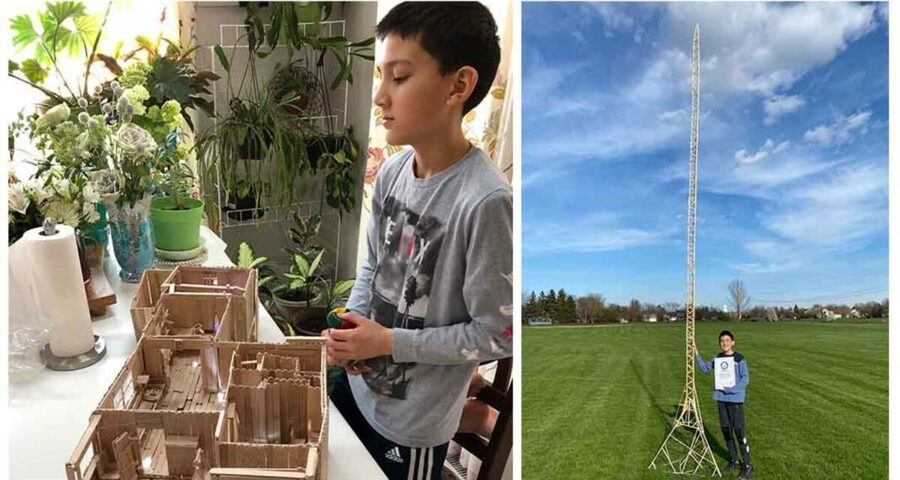 A 12-year-old boy from Napervillede, Illinois (USA) has built a Guinness record-breaking tower made up of ice lolly (popsicle) stick structure. The structure stands tall at a height of 6.157 m (20.20 ft). Eric Klabel decided that he wanted to pursue a record of his own after witnessing other record-holders in a video by Guinness World Records, as per the Guinness website.

Inspired by the projects his father built, and his own interest in popsicle stick sculpting, the 12-year-old mastered the structure in his very first attempt.

As per the website, while determining the shape formation of the title-holding structure, Klabel came to the conclusion it was better to build it in the “shape of a pyramid, to ensure a strongly supported framework”.

“To make the tower I had to build the same three feet long vertical structure many times, which got very repetitive, though it was still very fun to see it getting taller and taller,” he told the records site. The teenager has also previously created a motorised car, boat, box and even a marble run.

According to the site, in his earlier years, he first started forming shapes with wooden ice cream sticks, after being curious about the development and engineering of his childhood toys.

But it wasn’t until 2015 that Klalbel started experimenting with varied structures that he created with recycled materials like popsicle sticks.

One of his most impressive sculptures includes a popsicle chair that was actually usable! Another one is a replica of a house that included lights, furniture, and other household items – all made of wooden sticks.

“I felt accomplished and grateful when I became a Guinness World Records title holder. I was so happy that I was able to get to this point. My favorite thing about achieving the record was that I was able to be known for something I am passionate about,” he said.

What do you think of the incredible record?