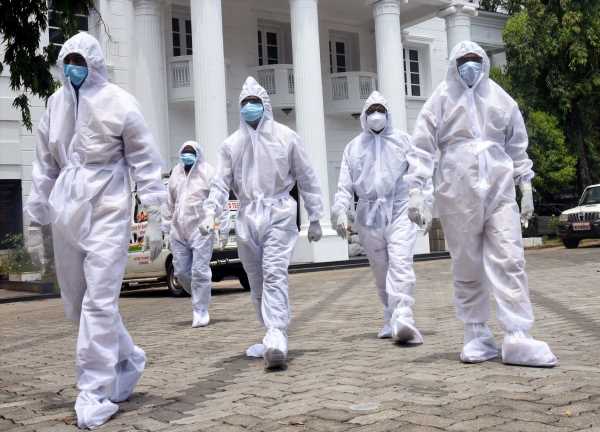 Rising COVID-19 cases in Kerala, coupled with the recent outbreak of the Zika virus, is causing concern to the health authorities here as the southern state battles to bring down the fresh infections.

After winning accolades for its ‘Kerala model’ of combating the contagion about a year ago, the state is now seeing daily fresh cases between 12,000 to 15,000 with no end in sight to the ‘prolonged surge’, as some experts put it.

Health Minister Veena George had recently said the virus numbers spiked due to certain unlock measures and that they were expected to go down.

While on June 1 this year, Kerala reported 19,760 positive cases, there was a slight decline for a week with 9,313 new cases being recorded on June 7.

Incidentally, India’s first Covid-19 case emerged from the state in January 2020 when a third year medical student from Wuhan, the epicentre of the virus in China, tested positive.

Two other Wuhan returnees from the state had also tested positive and all the three had subsequently recovered.

According to experts, the steady rate of COVID infection in Kerala would help the state to fight off the virus and ensure medical facilities are not overwhelmed, but the more it prolongs the more stressful it would be for doctors and healthcare workers.

While the medical experts who spoke to PTI praised the Kerala government for its preventive measures which helped keep the infection rate from peaking drastically, some opined the administration’s inability to enforce COVID appropriate behaviour after the unlock phase came into effect was one of the reasons that the numbers have not gone down.

Vaccination was the key and the state government should try to procure the vaccines by whatever means instead of just relying on the central government for supply, they said.

Dr T S Anish, who specialises in community medicine, said the present situation has its pros and cons.

A prolonged infection rate would put stress on the doctors and other healthcare workers and in case a third wave comes, the medical system which is partially filled could be overwhelmed.

He also said it was a matter of concern that the government was unable to reduce the rate of infection.

According to him, some of the measures taken by the government were unscientific, like allowing overcrowding at shops and liquor vends and not making available services online that could be.

“Crowding has to be prevented at any cost,” he said, adding, while people wear masks out in the streets, they do not do so in their workplaces or during a celebration.

Virologist Dr Sarada too said people were not following COVID appropriate behaviour which was also a reason for the cases not declining.

She and Anish were of the view that vaccination was the key, the only solution and the state government should try to get the vaccine in more quantities by whatever means.

Sarada also said that other states may not be showing such high numbers as they probably were not testing their rural population unlike Kerala.

Citing the positive side of the situation, Dr Anish said the government was able to prevent a sharp increase during the peak of the second wave of COVID by putting in place a lockdown and thereby, ensured the healthcare system was not overwhelmed.

This steady rate of infection could also help to prevent a third wave as the health system or machinery would be vigilant and would quickly detect any new variant or mutation.

According to him, if the cases go down substantially, the system would be less vigilant as there would be less testing and therefore, by the time a new variant or mutation is detected the third wave would have already hit.

Dr Amar Fettle, the state nodal officer for COVID-19, said that the Kerala government was carrying out extensive testing to ensure no one who is infected is missed out and it was taking measures to ensure elderly people and children, who would be vulnerable to infection, are protected.

Testing is being carried out in high risk groups, he added.

Fettle said that after a long period of lockdown, when the unlock phase comes into effect people venture out and therefore, the infection re-enters homes.

A prolonged surge is better than a short spike or wave, as then the healthcare system will not be overburdened, he said.

However, he said it cannot be predicted how long this trend will go on and when the numbers will go down.

Health Minister Veena George had on Friday had said ‘the government’s endeavour was to ensure the number of infected persons never goes above the medical capacity of the state, so that no one dies due to non-availability of beds or oxygen’.

Vaccination was the only way to prevent spread of the virus, she had asserted.

She had also said preventive mechanisms like enforcing lockdowns, earmarking containment zones, aggressive testing and tracing by the state government ensured large number of people susceptible to the infection were protected.

According to the minister, the Health department with the help of the police would be taking steps to ensure people follow the COVID protocols like social distancing and wearing of masks when they step out of their homes.

On Thursday, Prime Minister Narendra Modi had expressed concern over the persistently high number of COVID cases coming from Maharashtra and Kerala.

The opposition Congress and Bharatiya Janata Party in Kerala have attacked the ruling dispensation over the covid-related casualties, alleging a ‘mismatch’ in their numbers while George has maintained the government has nothing to hide and all deaths were being reported.

Former health minister K K Shailaja had also been slammed when the COVID cases had gone up steadily during her tenure.

To add to its woes, the state now has 14 active Zika virus cases and a Central team would reach here later to assist the government in handling the situation.