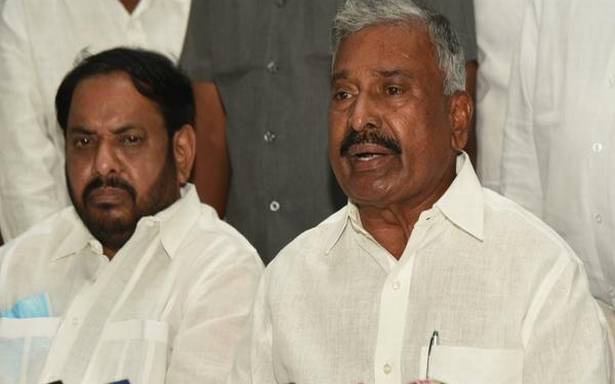 ‘Allegations being levelled by the TDP are frivolous’

The YSRCP has rubbished the allegations made by TDP national president N. Chandrababu Naidu and his son and party general secretary Lokesh as frivolous.

On the final day of the campaign for the byelection to the Tirupati parliamentary constituency here on Thursday, Minister for Panchayat Raj Peddireddi Ramachandra Reddy said the TDP had conceded defeat much before the election by not accepting his “resignation challenge.”

Mr. Reddy had earlier dared the TDP to get its four MPs resigned if YSRCP candidate M. Gurumoorthy won the election, and agreed for the resignation of the 21 YSRCP MPs if TDP candidate Panabaka Lakshmi got elected.

“Mr. Naidu has not responded to my challenge, which means he has already accepted defeat,” he remarked.

Reacting to the allegations of stone-pelting at Mr. Naidu’s public meeting and disruption of power during the TDP roadshows in Nellore district, Mr. Ramachandra Reddy said his party had no need to stoop so low, as it was way ahead in campaign for a “positive vote.” He wondered if the opposition party had no issues to debate on development.

He sounded optimistic on the party winning the election hands down, thanks to the implementation of the Navaratnalu schemes.

“If the voter turnout is above normal, we will win by a huge margin of six lakhs,” he said.

To the oft-made allegation of misuse of the volunteer set-up, Mr. Reddy sought to know where was the question of misusing volunteers when the end beneficiaries themselves were eager to vote for the ruling party.