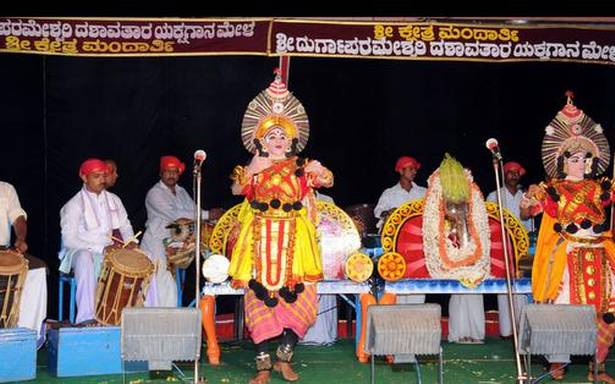 Mandarthi Sri Durgaparameshwari Dashavatara Yakshagana Mela, the over-a-century-old Yakshagana performing troupe, will resume its rainy season/off-season daily “harake aata” — shows staged for the fulfilment of the wishes of people — at Mandarthi in Udupi district from October 27.

The mela will perform during the off-season for the fifth consecutive year. Its performances got delayed this and last year because of COVID-19 restrictions. The mela had resumed its rainy season’s shows last year on September 25. Earlier, it used to commence the shows from mid-June.

The managing committee president of Mandarthi Sri Durgaparameshwari Temple H. Dhananjaya Shetty told The Hindu that the mela began performing during the off-season at the temple hall mainly to reduce the waiting period of hosts. Even after having five performing troupes of the mela, shows are booked till 2045, he said.

The temple broke the tradition of not performing in the monsoon in 2017 following pressure from devotees who felt that they had to wait for years for the shows.

Mr. Shetty said that about 400 persons have deposited their money for hosting the rainy season shows. The shows will go on till the Government gives permission to commence the annual regular “tirugata” (tour) from November to May.

During the pre-COVID period, the mela used to fulfil the vows of about 300 devotees by performing 150 shows in the rainy season. But these performances were reduced further due to delay in the commencement of shows due to the COVID restrictions for two years.

Earlier, it wound up its rainy season shows usually on November 1 or 2. After some days of rest, all the five troupes prepare for the annual tour, usually from November 17 or 18. The five troupes with about 250 artists staged 940 shows during their annual “tirugata”.

The mela’s second troupe was formed in 1992 and the fifth troupe came into being in 2004. The troupes were increased to reduce the increasing number of bookings and thus, give a chance to the parties to host their shows as early as possible.