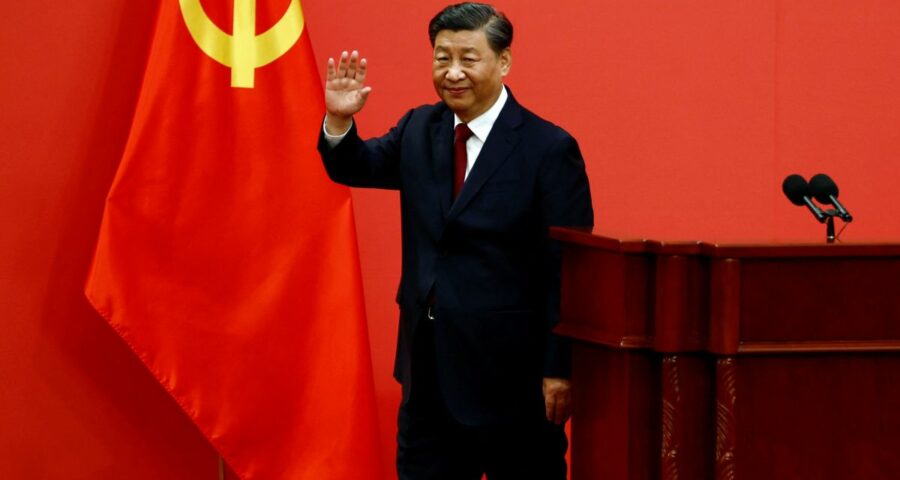 Chinese President Xi Jinping on Sunday created history, becoming the first leader of the ruling Communist Party after party founder Mao Zedong to get re-elected for an unprecedented third term in power with the prospect of ruling China for life.

Xi, 69, who was elected Sunday morning as General Secretary of the Communist Party for 3rd five-year tenure by the new seven-member Standing Committee packed with his supporters appeared before the local and foreign media here to herald the new era, widely termed ‘Xi era’.

Xi’s “election” for the third term in power formally ends the over three decades rule followed by his predecessors, barring Mao, of retiring after a 10-year tenure. Xi was first elected in 2012 and will be completing his 10-year tenure this year.

With moderates like Premier Li Keqiang, who was ranked number two, eased out in the election to over 300-member Central Committee on Saturday by the once-in-a-five-year Congress of the Communist Party of China (CPC), the Committee which met on Sunday elected a 25-member Political Bureau.

The Political Bureau elected a seven-member Standing Committee, which in turn elected Xi for a third five-year term as General Secretary.

Much on the expected lines, Xi was elected to the Central Committee on Saturday, to the Political Bureau and the Standing Committee and then as General Secretary on Sunday with relative ease as the Congress passed the key amendment to the Party’s constitution reinforcing his “core” status with the directive that all party members have the “obligation” to follow his directives and doctrines.

Observers say Xi’s emergence as the most powerful leader as President, party leader and head of the military with prospect of leader for life in the footsteps of Mao, whose extremist ideological campaigns like the Cultural Revolution resulting extermination of millions, is widely expected to be viewed with sense of unease and concern as the one-party state has now become one-leader state.

The well-choreographed week-long 20th Congress ended on a sordid note on Saturday with former President Hu Jintao being physically escorted out under the glare of the media at the ornate Great Hall of people.

The incident is seen as an irony as 79-year-old Hu had peacefully handed over power to Xi ten years ago in 2012. However, official media reports said he was unwell.

Meanwhile, a different central administration headed by the new premier will formally take place in March.

The party Congress also approved an amendment of the party Constitution on Saturday that could further enhance Xi’s stature as China’s leader.

Xi, in his brief closing remarks on Saturday, said the revision of the Constitution sets out clear requirements for upholding and strengthening the party’s overall leadership.

“Dare to struggle, dare to win, bury your heads and work hard. Be determined to keep forging ahead,” he said at the concluding session of the Congress.

“We must be ready to withstand high winds, choppy waters and even dangerous storms. Confronted with drastic changes in the international landscape, especially external attempts to blackmail, contain, (and) blockade… China, we have put our national interests first,” Xi said, in an apparent reference to the growing negativity against China in the US and West.

The CPC Congress has realised its goals of unifying thinking, fortifying confidence, charting the course, and boosting morale, Xi told the 2,338 delegates present at the event, the state-run Xinhua news agency reported.

The Congress also appointed a new team of anti-corruption wing of the party called the Central Commission for Discipline Inspection (CCDI), which directly functions under Xi.

According to official reports, CCDI punished about five million officials, including many top army generals, in the last 10 years.

Critics say Xi’s shock and awe campaign helped him to consolidate his hold on power.

Resolutions passed at the Congress eulogised Xi and his ideas, merging Marxism with Socialism with Chinese characteristics.

A resolution on an amendment to the Constitution of the CPC adopted at the Congress said all party members should follow Xi’s leadership.

The Congress calls on party organisations at all levels and all party members to follow the firm leadership of the Party Central Committee with Comrade Xi at the core, holding high the great banner of socialism with Chinese characteristics, it said.

“Xi Jinping Thought on Socialism with Chinese Characteristics for a New Era is the Marxism of contemporary China and of the 21st Century and embodies the best Chinese culture and ethos of this era,” the resolution said.

Another lengthy resolution on the work of the previous Congress stresses that Marxism is the fundamental guiding ideology upon which the CPC and the country are founded and thrive.

It also laid out guidelines for the Chinese military.

The Congress stresses that achieving the goals for the centenary of the People’s Liberation Army in 2027 and more quickly elevating the people’s armed forces to world-class standards are strategic tasks for building a modern socialist country in all respects, the resolution said.

The Congress calls on the whole party, the entire military, and the Chinese people of all ethnic groups to stay closely rallied around the Party Central Committee with Comrade Xi “at its core, to keep in mind that empty talk will do nothing for our country and only solid work will make it flourish,” it said.

Praising efforts to control the COVID-19, the resolution also affirmed firm opposition to Taiwan’s independence. China claims Taiwan as part of its mainland.

Battery-operated loudspeakers were also hung in some places blaring anti-Xi and anti-Zero COVID slogans. Police quickly moved to remove the banners and loudspeakers. Similar reports of protests had also come from different cities of China.