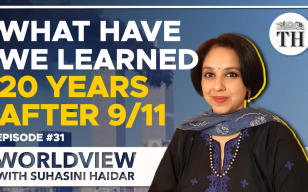 Twenty years after 9/11: the US has left Afghanistan in the hands of the Taliban again, the global terror threat remains, the UN is a divided house: have any lessons been learned from 2001

Twenty years ago, the entire world came to a crashing halt, when two planes one after the other struck New York’s iconic Twin towers, and the Pentagon building in Washington. The attacks killed nearly 3,000 people, some of whose remains are still being identified, and led to the launch of the Global War on Terror, that began with US strikes on Afghanistan.

–        The United Nations spoke in one voice against the attacks, and repurposed its sanctions regime to focus on stopping terrorism.

–        After attacking Afghanistan in 2001, the US defeated the Taliban, transporting much of its leadership to Guantanamo bay prison to stand trial

–        Pakistan became an ally in the US war on terror, offered its bases for the US attack in Afghanistan and strikes on both sides of the Durand line. Most of those wanted for planning the 9/11 attacks were arrested or killed in Pakistan, including Osama Bin laden in 2011.

–        For India, that was still recovering from the IC-814 hijacking, and that faced the parliament attack a few months later, there was the hope that the world would finally acknowledge what it had been saying about the Taliban, terror groups in Afghanistan, and Pakistan’s role in building them and giving them shelter.

How the World has changed in 20 years

– Afghanistan has come full circle in exactly 20 years. The proverb, attributed to a Taliban commander by a Canadian official, that if the US had watches, the Taliban had the time seems to have come true, and they ran out the clock on American motivation to remain in Afghanistan. As part of a deal with the Taliban signed a year ago, the US pulled out its last remaining troops by August 31, 2021.

– The Taliban is back in power, and has formed an interim government, with 33 cabinet ministers, 17 of whom are on the UN Security Council list as terrorists designated after the 9/11 attacks. Among them, the Haqqani group leadership, that have carried out some of the deadliest attacks in Afghanistan, including on the Indian embassy in 2008 and 2009. While the Taliban promises not to allow the use of Afghanistan for terror groups, there is every evidence that Al Qaeda remnants, Lashkar e Toiba, Jaish e Mohammad, Islamic State, ETIM  and other designated terror groups continue to exist in Afghanistan, and could potentially plan attacks from there in the months and years to come. Worse still, the Taliban and its allies have access to US weapons and an armoury left behind, tanks and vehicles, and even some aircraft.

– The Northern Alliance that defeated the Taliban with the US has been disbanded, and the national resistance front lost the last hold out of Panjshir this week, failing to secure help from any international source. However, the Taliban actions now, brutalising citizens and violence will no doubt sow the seeds for future instability, internal conflict and possibly civil war.

-Diplomatically, the Taliban is not as isolated as it was 25 years ago: Russia, China, Iran, Pakistan, Turkey and Qatar maintain their embassies in Kabul, the US and its European allies are maintaining their embassies in Doha while they decide what to do. For the past two years Taliban has engaged many countries directly, including most recently, India, even as Russia China US put all their other differences aside to form the Troika plus with Pakistan to negotiate with the Taliban.

-The Taliban government has refused to accept a democratic process, and Afghanistan, which held elections four times beginning 2004, will revert to a Taliban dictatorship, not a representative system. None of the leaders from previous governments including former President Karzai and former CEO Abdullah, women or ethnic minorities are included in the cabinet. What remains to be seen if how the current generation in Afghanistan, those who were just born around 2001, will react to the loss of freedoms, loss of women’s rights, loss of democracy, and economic prospects?

–        From being a pariah state for supporting the Taliban in 1996, to becoming the US’s greatest ally in the war on terror, from Taliban safe haven, to chief negotiator on the Taliban’s behalf, Pakistan is once again in a confident position, with the Taliban back in power in Afghanistan.

–        The Pakistani military, that has always said that it fears a hostile Afghanistan on its western front, accused India of meddling in Afghanistan, is also seeing that threat recede at least for the moment. The Pakistan military is also accused of helping the Taliban secure its victory, and as news of differences within the Taliban over government formation, ISI Chief Gen Faiz Hameed’s appearance in Kabul seemed to indicate it is playing a role there too. In 2011, remember, US Admiral Mike Mullen had called the Haqqani network the “veritable arm of Pakistan’s ISI” and that is the group in control of Kabul.

–        In 2001, Saudi Arabia UAE and Pakistan were the countries that recognised the Taliban, Osama, and of 19 9/11 hijackers, 15 were from Saudi Arabia, 2 from UAE. All three countries however joined the US war on terror.

–        In 2003, the US under President Bush turned to Iraq, claiming a link to 9/11 and Weapons of mass destruction, both of which allegations were later found to be false. The war ended the reign of Saddam Hussein but also led to the rise of ISIS, after the US disbanded the Iraqi army. ISIS went on to form the most brutal regime in parts of Syria and Iraq before it was defeated by the international coalition on terror led by the US

–        In the current scenario in Afghanistan, that instead of KSA and UAE, it is their rivals: Iran, Turkey and Qatar that are playing a more prominent role, all three have embassies in Kabul, and have been engaging the Taliban intensively.

–        In a sense, the future of Afghanistan may also determine the future leadership of Islamic countries.

–        The US has left Afghanistan, after about 2,400 American soldiers and 50,000 Afghans have been killed in its 20-year operation. Along the way its goals changed: from revenge for 9/11 to defeating the Taliban, to catching Al Qaeda leadership, promoting democracy in Afghanistan, disabling the terror threat to the US….

–        While most of those aims have not been achieved, there has been No comparable attack on the United States since 9/11.

–        While Osama Bin Laden was killed on the spot, his successors still run Al Qaeda, many based in Afghanistan and are likely to be enthused to regroup by the Taliban’s victory. The trial against the main Al Qaeda 9/11 planner Khalid Sheikh Mohammad and 4 others is yet to begin in the US. They had another pre trial hearing this week, and remain at the US prison in Guantanamo bay.

–        US President Joseph Biden had said “America is back”, but has now added that the pull-out from Afghanistan and Iraq marks the end of an era of “major military operations to remake other countries." Instead, the US appears to be readying to turn its focus to the Indo-Pacific and its rivalry with China.

–        After 20 years of development projects and close strategic ties with Afghanistan, India is now reviewing its options with the Taliban government in power, and Pakistan’s role in prominence. The Modi govt has had one public meeting with the Taliban, but otherwise no links, and the presence of Haqqanis in the cabinet means not much diplomatic room.

–        Unlike in the past, India has not opened its doors for Afghan refugees, has evacuated mainly Indian citizens and Sikh and Hindu Afghans who had long term visas for India. It has also not issued more than a few e-visas for those wishing to travel here once commercial flights resume.

–        The terror threat emanating from Afghanistan will add to India’s security threats from Pakistan and China, making its continental frontier one of even more concern- India’s warnings on terror have been largely unheeded, even after the Mumbai attacks, it has faced cross border attacks, and despite cooperation with the US and Russia, the threat will eventually have to be tackled alone

–        India is left with levers only on the international stage, at the UN, where the decision on whether to allow the Taliban government representation, delist Taliban members from the Sanctions list, and allow funding through UN agencies to Afghanistan to continue

–        India also has to contend with walking a tightrope balance: between the US and allies, and Russia-China combine. At the UNSC, where India is a member, the differences are growing wider, PM Modi is addressing the BRICS and SCO with Russia and China, while heading to Washington for the Quad summit. New Delhi hosted CIA Chief William Burns and Russian Security chief or Secretary of the Security council Gen Nikolai Patrushev back to back, and will have to manage more such meetings with both sides.

Twenty years later, a lot has changed for some countries, and a lot has gone full circle for others. The real question is, how many lessons have been learnt along the way, so the future doesn’t reflect the past.

Inside Al-Qaeda and the Taliban: Beyond Bin Laden and 9/11 by Syed Saleem Shahzad

9-11: Was There an Alternative?  by Noam Chomsky

The Legacy of 9/11: How the War on Terror Changed America and the World:  an anthology by Foreign Affairs