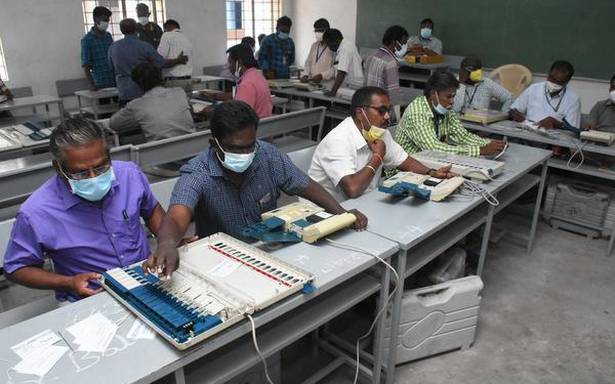 The works to load voting symbols and names of candidates contesting in the Salem Corporation in electronic voting machines began at Shri Sakthikailassh Women’s College here on Friday.

Corporation Commissioner T. Christuraj and other senior officials inspected the progress of the works. As many as 709 polling booths would be set up for the elections to 60 Wards under the Salem Corporation.

According to officials, 618 candidates are in the fray. As many as 864 electronic voting machines have been allotted for the voting here.

In Ward 44, where 17 candidates are contesting, two ballot machines would be placed for voting at booths. The symbols and names of candidates are being loaded on to the EVMs as per the final candidates’ list and its being done in the presence of candidates or their representatives. Zonal officers also supervise the loading process, officials said. Four engineers from Bharat Heavy Electricals Limited are engaged in the process.

Mr.Christuraj checked whether the loading is done as per the Election Commission’s guidelines. He also reviewed the security measures at the centre.