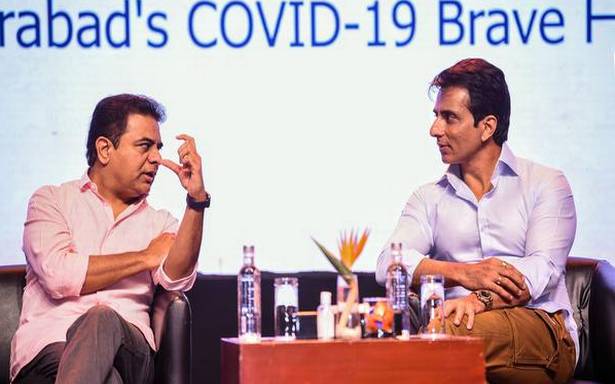 Actor says philanthropic work must continue regardless of pandemic

Over 20 months since the COVID-19 outbreak upended our lives, many have managed to return to normal life. But the fear of a third wave lurks. According to actor and philanthropist Sonu Sood, the third wave is here since people are still suffering the devastating consequences of the pandemic.

“People who have suffered because of COVID, those who have lost their jobs, those who are not able to send their kids for education are suffering every day. Our job [of helping those in distress] does not end. It has to continue,” he said.

Addressing volunteers from Telangana who have put in efforts to help people during the first and second waves, Mr Sood detailed the kind of obstructions that one could face while working for the welfare of people. He listed four obstacles that volunteers often face as ‘weapons’ — their motive is questioned and their work is seen as a stepping stone to enter politics; they are demoralised through criticism; they are physically harmed or maligned; and lastly, they themselves get a superiority complex.

“The third weapon is murder — someone will be shot, or be subjected to character assassination. Some thing or the other will be done to stop you from reaching your goals. The final weapon is shradha (admiration). People start treating you as God. When you start thinking that ‘I am god, I will only preach and not do anything’, the work stops. Don’t let the sin win. We have to cross all those stages,” added Mr Sood.

The actor added that the work should not stop regardless of COVID situation as people are always in need of help.

‘Raids out of fear’

Referring to these four ‘weapons’, Telangana Industries and IT Minister K.T. Rama Rao said there will always be attempts to character-assassinate like it happened to Mr Sood, and added that IT raids and ED raids were conducted on the actor out of fear that he may foray into politics.

“But Sonu, don’t be scared of anyone. Life is short. We should do whatever is possible at an individual level/ celebrity level as you have shown. You should not be deterred. We are all with you,” said Mr Rama Rao.