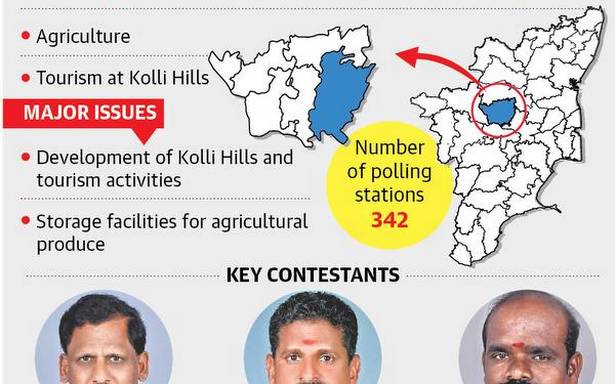 Development of Kolli Hills a major demand of the voters

If the All India Anna Dravida Munnetra Kazhagam (AIADMK) wishes to retain its bastion in Senthamagalam (Reserved) constituency, then it should face the incumbent MLA, who is a rebel candidate.

Unhappy with the ruling party’s decision in fielding S. Chandran as the candidate for the constituency, incumbent MLA C. Chandrashekaran is entering the fray as an Independent candidate in autorickshaw symbol.

DMK has fielded K.Ponnusamy, who lost to AIADMK and DMDK in the last two elections. The AMMK has fielded P. Chandran and the India Jananayaga Katchi, which is part of MNM front, has fielded V. Selvaraj.

Mr. Chandrashekaran had served as the president of Kolli Hills Panchayat Union in the past and is quite famous among the electors. He succeeded in putting up a show of support by conducting a protest in the Kolli Hills demanding the AIADMK leadership to announce his name as the official candidate for the constituency. As the AIADMK leadership did not budge, Mr.Chandrashekaran went ahead and filed nomination as an Independent, following which he was ousted from the party.

Agriculture is the predominant occupation in the constituency. The farmers who cultivate betel nuts, tapioca, mangoes have been demanding setting up of storage facilities. Though Kolli Hills in the constituency attracts tourists, lack of amenities affect the the overall development of the hill station. The village even lacks proper bus connectivity.

People have been demanding development of the Kolli Hills into an eco-tourism spot and improvement of amenities at Agayagangai and other waterfalls in the hill station.

A festival similar to the annual flower show in the Nilgiris district, development of other tourism spots in the hill station are the major demands of the voters.