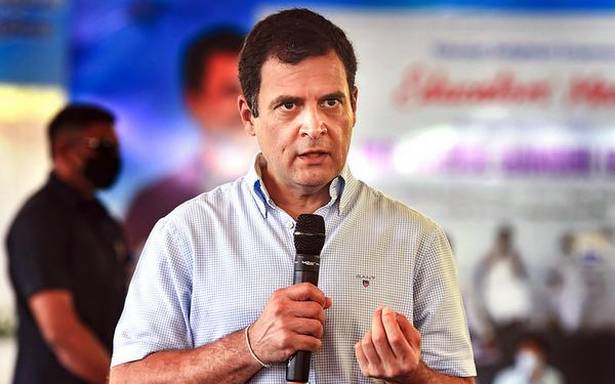 The Congress is all set to fall back on party former chief Rahul Gandhi’s charisma for its return to power in Kerala. But, will the ‘Rahul magic’ work again as it did in the last Lok Sabha polls? Some developments after the United Democratic Front’s 2019 victory may put a dampener on the party’s hopes.

The party’s strategy for the Assembly polls was evident from Mr. Gandhi’s speech at the conclusion of the UDF’s recent pre-poll rally, where he made rare scathing remarks against the Left.

There are many who are doubtful about its success as the perception about Mr. Gandhi has undergone significant changes after 2019. His interventions in national politics are now seen as sporadic public appearances and mostly limited to social media comments.

The UDF’s victory in the LS polls is mainly attributed to Mr. Gandhi’s national image as a ‘secular liberal’ fighting a ‘right-wing Hindutva brigade’ led by Prime Minister Narendra Modi. Voters from minority communities and people without political leanings thought the Congress-led front stood a better chance to be an alternative to the National Democratic Alliance (NDA) at the national level. This, along with the revulsion at political murders in north Kerala in which CPI(M) activists were the accused and the resentment against the Left Democratic Front government’s handling of the Sabarimala issue, sealed the UDF victory. The Congress leader got elected from Wayanad too.

However, Mr. Gandhi’s as well as his party’s response to issues such as the Ayodhya Ram temple construction, agitation against the Citizenship (Amendment) Act (CAA), and farmers’ stir has not inspired confidence in people who supported him earlier.

Muslim organisations such as the influential Sunni clerics forum Samastha Kerala Jamiyyathul Ulema, which supports UDF ally Indian Union Muslim League, were seen sharing the stage with the Left in protests against the CAA.

Congress general secretary Priyanka Gandhi-Vadra’s statement that the ‘bhumi pujan’ for the temple was a “marker of national unity, brotherhood and cultural harmony” did not go down well with Muslim outfits. The Samastha even came out with a statement against the Congress.

The party is being accused of sacrificing its secular credentials and pursuing a soft Hindutva line up north.

With the NDA wooing a section of the Christian community, another vote bank of the Congress, there have been apprehensions about the erosion of the UDF’s support base. The impact of the campaign blitzkrieg the party is planning featuring Mr. Gandhi and Ms. Vadra in the coming days is anyone’s guess.