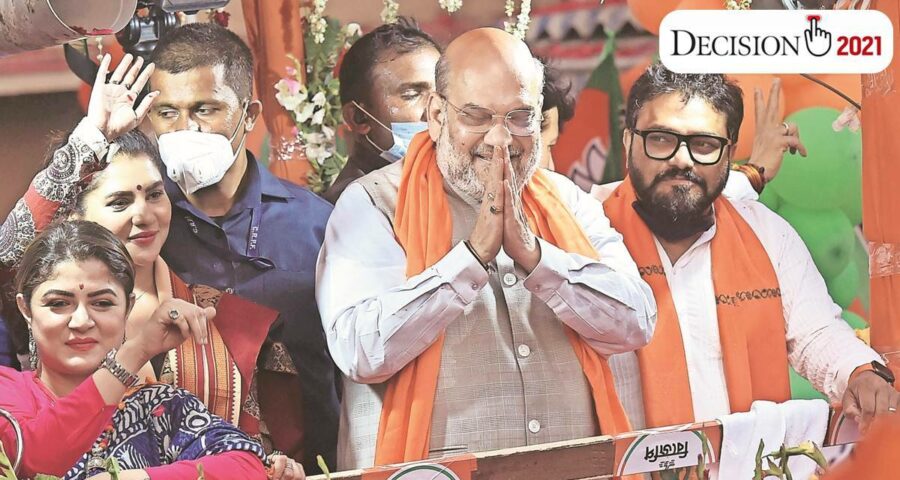 Speaking at the Singur roadshow, the BJP leader said: “We will develop the area by setting up industries and a Rs 500 crore intervention fund has been announced for potatoes, for which the area is known, in our Sankalp Patra (manifesto)." Union Home Minister Amit Shah on Wednesday held roadshows at three places, including Singur — once a hotspot of the anti-land acquisition movement — and promised rapid industrialisation of the state if BJP is voted to power.

Speaking at the Singur roadshow, the BJP leader said: “We will develop the area by setting up industries and a Rs 500 crore intervention fund has been announced for potatoes, for which the area is known, in our Sankalp Patra (manifesto).”

Shah said that after coming to power in West Bengal, the BJP government will ensure that small, medium and large industries are set up in Singur, which is situated on the national highway connecting Kolkata and New Delhi. “We will pursue politics of development, dialogue and cooperation, instead of confrontation,” he said.

The roadshow that started from Dulepara More took an hour to reach Singur police station as chants of ‘Jai Shri Ram’ pervaded the air.

Bhattacharya’s induction and nomination had caused a lot of resentment among BJP old-timers in Singur.

Later in the day, Shah had lunch at the home of a ‘rickshawala’ at Domjur in Howrah after winding up a roadshow there. He was accompanied by BJP candidate for Domjur Rajib Banerjee, another TMC turncoat.

Speaking to mediapersons, Shah said that the BJP was confident of winning 63 to 68 seats in the first three phases of elections held in West Bengal so far.

Polling has been completed in 91 of the 294 Assembly seats in the state, which will see five more phases of elections.

He also claimed that BJP will win over 200 seats in West Bengal and gain leads in the rest of the five phases.

Asserting that Mamata Banerjee’s departure is assured, he said at Mallick Fatak in Howrah, “She is such a big leader, so her departure should also be with a big margin.”

The home minister also promised to wipe out hooliganism and political violence if his party came to power.

Later in the day, Shah held a roadshow in Kolkata where he was accompanied by Union minister Babul Supriyo, who is contesting from Tollygunge.

Shah said that a BJP government in the state will make its border security strong enough to ensure that no one can cross over into it illegally.