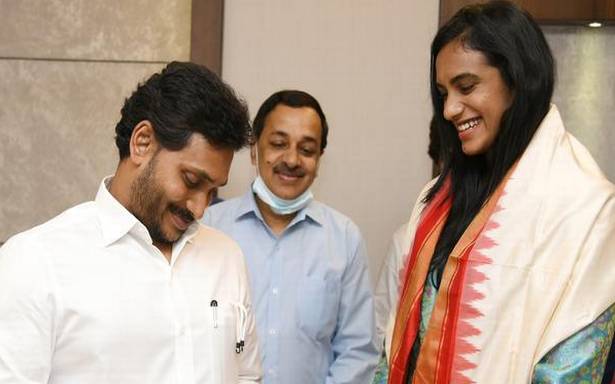 Jagan felicitates her for winning a bronze in Tokyo Olympics

Ms. Sindhu, along with her family members, called on Mr. Jagan Mohan Reddy at the Secretariat and thanked him for his support and blessings.

Later, addressing the media, Ms. Sindhu said she was happy to bring an Olympic medal home as the Chief Minister had wished when she met him before leaving for Tokyo. “I will soon give a tangible shape to the badminton academy,” she said.

“The 2% sports quota for job-seekers and the YSR Awards being given by the Andhra Pradesh government will encourage talented sportspersons to win laurels for the country,” Ms. Sindhu said.

Later in the day, Ms. Sindhu, along with her family members, offered prayers at the Kanaka Durga temple atop Indrakeeladri here. The temple authorities accorded her a traditional welcome with ‘poorna kumbham’. Executive Officer Bhramaramba presented her a photograph of Goddess Kanaka Durga, prasadam and silk vastrams.

Later, addressing the media, she said, “I need to play in the 2024 Olympics and bag a gold medal.”