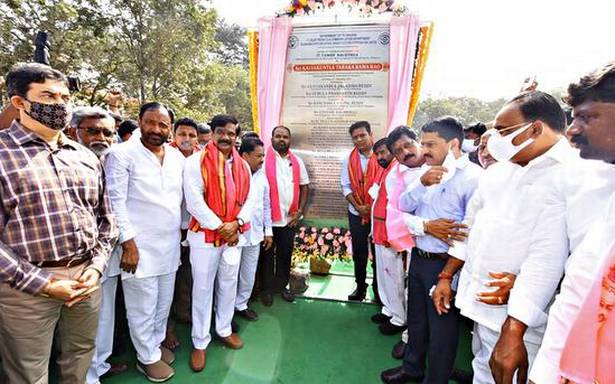 As part of the roadmap for comprehensive development of Telangana, Nalgonda town will be sanctioned about ₹100 crore worth programmes and witness a fast-paced progress soon, Minister for Municipal Administration K.T. Rama Rao said on Friday.

Following Chief Minister K. Chandrasekhar Rao’s review with officials in Nalgonda on Wednesday, and the cue for the Ministers to follow up and direct actions, Mr. Rama Rao led a town padayatra, interacted with general public and took stock of the ground situation.

Along with District Collector Prashant J Patil and local legislator K. Bhupal Reddy, he inaugurated the newly-constructed hostel for boys at the Polytechnic College and at the beat market laid the stone for the integrated vegetarian and non-vegetarian market.

Putting the town in the league of IT hubs in towns such as Warangal, Karimnagar, Khammam, Mahabubnagar and Nizamabad, Minister KTR laid the foundation stone for IT hub at Nalgonda. He said nine companies had already signed the memorandum to set up their offices in Nalgonda. The hub would achieve a full shape and be inaugurated in about 18 months, he said.

He announced five basti dawakhanas for Nalgonda town, skilling programmes leading to jobs for youth and construction of Vaikunta Dhamam. Of the ₹100-crore plan, about ₹30 crore worth sanctions had already been made, and Nalgonda would witness a changed face in one and a half years, he said.

Mr. Rama Rao credited the progress and welfare path of Telangana, in setting up medical colleges, extending Aasara pensions, and becoming leading paddy supplying State, and said they were due to KCR’s vision for overall development of the State.