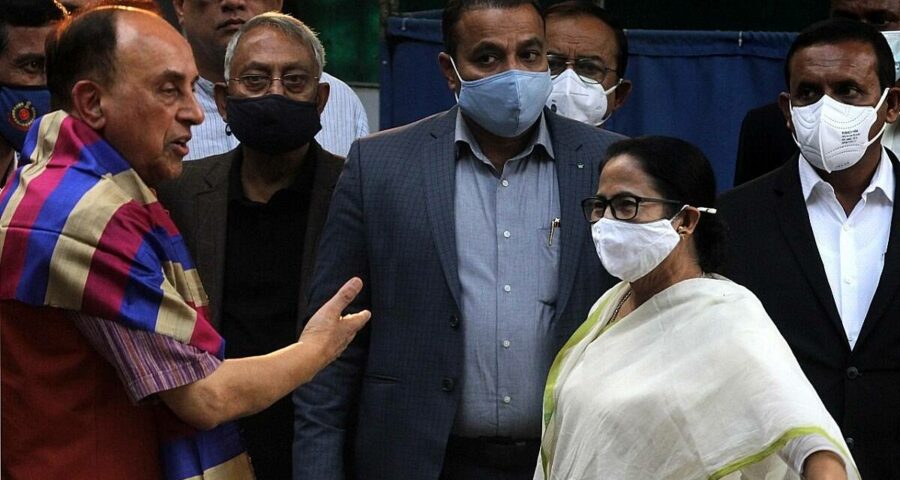 ANNOUNCING THAT she plans to visit Prime Minister Narendra Modi’s constituency Varanasi to “light diyas”, West Bengal Chief Minister and TMC supremo Mamata Banerjee on Wednesday said her party does not want to weaken the fight of regional parties against the BJP by contesting polls in every state, but is ready to campaign if required.

Briefing reporters after meeting the Prime Minister on the third day of her Delhi visit, Banerjee said she will campaign if any regional party invites her to do so. “A decision will be taken when the time comes. In Goa, Haryana and Tripura, we have started [party units]. In Uttar Pradesh, we have a small unit. But I feel there are some areas where let them fight, the regional parties, strongly, if necessary we can campaign for them, it depends,” she said.

Responding to a related question, she said, “I want to visit Varanasi. There I will light diyas, there are plans to visit Shiv Mandir.”

“The TMC wants that the BJP is defeated. But we will not fight polls everywhere. We will fight where we are needed. If Akhilesh wants our help then we are ready to do so,” she said, when asked if the TMC will field candidates in the 2022 Uttar Pradesh Assembly polls.

On her meeting with the Prime Minister, Banerjee said she raised several issues ranging from the decision to expand the territorial jurisdiction of the BSF in Bengal, “which will disturb the federal structure”, to clearance of pending dues, and the “atrocities in Tripura”.

She said she told the Prime Minister that ideological differences should not put state-centre relations under strain.

“Your party and our party have separate ideologies. But that should not affect state-Centre relations. The Centre develops when a state develops,” the Chief Minister said, adding that the Prime Minister has accepted her invite to inaugurate a global business meet in West Bengal in April.

“On the BSF issue, I said in our country we need to strengthen the federal structure. The BSF is not our enemy, but law and order is a state subject and it may lead to confrontations. Just three or four days ago, three people died due to firing in Cooch Behar district. So we said if you need to secure the border and need support from state, state is ready. But it is not right to disturb the federal structure,” she said, demanding that the Ministry of Home Affairs order extending the BSF’s jurisdiction up to 50 km inside the international borders be revoked.

When asked if she plans to meet Congress president Sonia Gandhi and AAP chief Arvind Kejriwal during her stay here, she said, “I did not seek time from anyone apart from the PM. I know there are polls in Punjab and they (Gandhi and Kejriwal) are busy, let them work for their party.”

Pressed further, she said, “Do I need to meet every time? Is there any such constitutional provision ? I said I didn’t seek any time. They are busy with Punjab polls, let them work for their party.”

However, Banerjee said she will meet Maharashtra Chief Minister Uddhav Thackeray and NCP chief Sharad Pawar during her upcoming visit to Mumbai from November 30.

Refusing to respond to a question on Congress leader Adhir Ranjan Chowdhury’s criticism of her, she said: “Ask our block president.”

Rejecting suggestions that TMC’s aggressive attempts to expand is coming at the cost of Congress, Banerjee said, “If someone joins our party, it is that individual’s choice. We are not into building or breaking any party.”

On her meeting with BJP leader Subramanian Swamy earlier in the day at TMC general secretary Abhishek Banerjee’s official residence, she said: “He is a senior person, BJP MP. You can meet anybody if a person is interested to meet you. There may be political differences but what is the harm? This is our democracy.”

Swamy, who was dropped from the BJP’s national executive committee last month, told reporters they discussed matters related to West Bengal. On Tuesday, he had met Governor Jagdeep Dhankhar in Kolkata.

Responding to a question on whether he plans to join the TMC, Swamy said: “I was already with her (Mamata Banerjee). There is no need for me to join.”