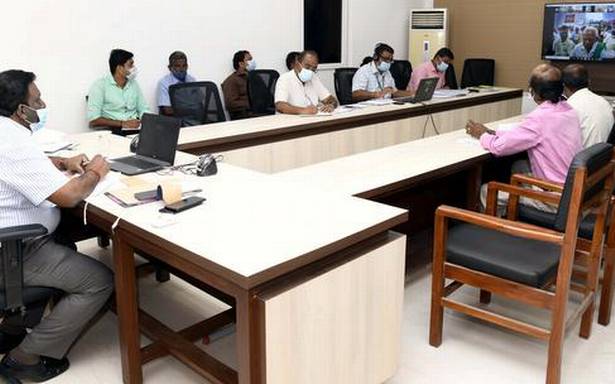 Complaining that no tangible steps had been taken to end the menace, farmers from various locations in Theni district claimed that the wild boars destroyed their crops and sought the Collector’s intervention.

Speaking at the meeting which was held on the virtual platform, the farmers said that despite taking a number of preventive measures, their crops had been destroyed by the wild boars. “The forest and agriculture department officials should examine ways to sort out the issue,” they pleaded.

Presiding over the meeting, Collector K. V. Muralidharan said that the officials would positively examine the issue and help the farmers in containing the wild boar menace. He instructed the officials to respond to all the grievances within a fortnight so that the district administration could take action on them.

Apart from encroachment issues on water channels, the farmers also raised issues of pest attacks on coconut and sugarcane crops. Timely intervention was essential and the disease had to be prevented as otherwise the crops may whither or yield may fall, they pointed out.

The Collector said that after 14 years, water was released from the Mullaperiyar dam on June 1, which had facilitated in irrigating over 10,900 hectares of land coverage with paddy, cotton, sugarcane and other crops. He assured of all assistance to the farmers including adequate stocks of fertilisers for the rest of the season.

The officials appealed to the farmers to get an insurance policy for their crops. They said, for the kariff season, eight crops including corn, groundnut, cotton have been covered under insurance. Similarly, plantain, onion, tomato, brinjal and cabbage crops too have insurance policy and suggested the farmers to remit the premium before August 31.

Presenting the State winner award for producing the highest yield in sugarcane, a progressive farmer Kumaravel received ₹25,000 award and a certificate from the Collector on the occasion. Likewise, Theni district also bagged second place in corn production and the award of ₹10,000 was presented to farmer Muthuraj and another farmer Ramamurthi too got second place in T.N. and got ₹ 10,000 for millet production.

The Collector appreciated the winners and hoped the recognition by the State government would motivate other farmers in the district in the coming years.