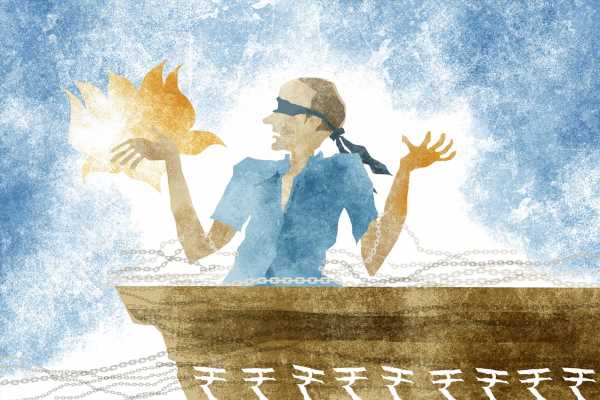 ‘Three decades after liberalisation kicked off, my friend’s son and niece — both born well after that historic shift in economic policy — find themselves newly off the beaten path for no fault than listening to their heart,’ notes Shyam G Menon.

After several weeks of near lockdown due to the second wave of COVID-19, it was a relief to reconnect with my friend and catch up on how he and family were faring.

Among the topics we discussed was the unconventional career choices of his son and niece, both of who appeared embarked on an adventure.

In India, given herd mentality, anything outside the beaten path is a test of commitment to one’s choice and enduring the journey.

Compared to this, mainstream choices are like a conveyor belt.

Notwithstanding the hype around competitive exams offering access to elite courses in engineering, medicine and management, that journey rarely pushes you into life on an island.

Both to make the cut and education beyond it, you stick with the group and get carried through.

It is success by herd and frankly, conformist.

Without doubt, there are those making choices because they feel a genuine attraction for the subject.

But the dominant pull is the success and security promised those undertaking the trip.

In contrast, when it comes to wholly unconventional career choices, you heed your inner voice.

Often that voice is all you listen to. Mistakes outnumber success.

The choice made and the journey thereafter are typically sole reward.

You have the satisfaction of having tried what you liked. Plus, the experience rubs off on you, contributing to personal evolution.

The other topic we touched upon while conversing in the shadow of the second wave, was of Narendra Modi still returning to power in 2024.

The BJP will have us to thank, should it happen.

We are a petty lot, trapped in insular family life.

At the same time, we don’t like any blame fixed on us. It’s good to be distracted from the over-populated mess we diligently authored and keep authoring.

In such distraction and the voting done in its shade, the political Right-Wing triumphs.

Why become morose dwelling on the present when in the past, we were great and, in the future, we will be superpower?

Naturally therefore, when the going got tough with the virus’s second coming and the vaccination drive faltered due to vaccine shortage, the BJP chose to bury its head in the sand.

Of all the healers known to humanity, time never fails. With time, pain eases and errors are forgotten.

The ruling party’s strategy may already seem betrayed in the urgency shown towards vaccination.

A scenario of many vaccinated by 2022 or thereabout appears to satisfy the government.

Until then, with vaccine shortage around, we will remain stuck in monitored freedom for our safety.

Post vaccination in full swing and GDP on the revival (by when the next general elections will be closer), we will be back to pursuing money, chasing power and marvelling at the Central Vista buildings.

It sets the stage for the Right-Wing’s potential return along with its most successful leader yet.

Not to mention, in the years after 2024, should delimitation happen, a larger Parliament (as envisaged in Central Vista) will ensure greater representation for states with high population, incidentally the home turf of Hindutva.

It is a bleak scenario, which one hopes won’t be the reality going ahead.

For me, the reason the BJP must go is related less to COVID-19 or vaccination gone askew.

It is more a fundamental disagreement with what the Right-Wing represents — their view of country, community, diversity, majority etc.

In this context, a highlight of my generation has been the bridging experience between the India from before economic liberalisation and the country that followed it.

We witnessed the transition. Liberalisation was a disruptive game.

But what the duo of Narasimha Rao and Manmohan Singh engineered didn’t cause insensitive, overnight disruption like Modi’s demonetisation, sudden lockdown or vaccination delayed. Its pains came with forewarning.

It authored new patterns, among which were fresh approaches to livelihood.

Being entrepreneur wasn’t frowned down upon.

In Indian cities, career choices off the beaten path began to manifest.

Alterations mid-career were seen. People resigned their existing jobs and took to new professions and even new ways of life.

In other words, from life by herding and the perceived certainty of established avenues, we started shifting (in small numbers) to life by choice and adventure.

It was the days preceding affirmation of a country as young by census findings.

Yet, at heart, thanks to liberalisation, we an old country, felt young.

No doubt, those were the early days; what one would call the honeymoon phase when for nothing but curiosity for the unusual, society’s bandwidth of tolerance temporarily widened.

Notwithstanding the conservatism of Right-Wing politics, this underlying sense of a youthful country did not suffer during the Atal Bihari Vajpayee-led National Democratic Alliance government.

Even during the struggling second term of the United Progressive Alliance government led by Manmohan Singh, the sentiment stayed alive despite the first flush of economic liberalisation clearly maturing (and thereby courting corrosion) and signs of backlash against globalisation and liberalism in several countries.

Under Modi, a different trend flourished.

Even as economic policy continued pretty much the same, the Right-Wing’s natural check on liberalism progressively graduated to a plunge into social regression.

A relay of moral policing incidents and posturing by conservative society got underway.

This constant interference in social life, religion, culture, dietary habits and so on has been the stuff of an irritating background score in the Modi years. A source of unfading worry.

Complementing it were other aspects like strident patriotism and nationalism, neither of which spared the patience to be naturally born from within.

Instead, they were enforced by majoritarianism and backed by a contagion of political correctness.

It was extremely divisive (the schisms split families).

But for the gullible, it was also magnetic as what the Right-Wing offered was the convenience of herd mentality and conveyor belt.

Park yourself with the majority — in aggressive avatar to boot — and you are guaranteed survival.

If you are dumb enough not to notice this architecture of convenience or are purposely overlooking it, you have the added bonus of appearing smart.

Through all this, as regards livelihood, from being entrepreneur and individual-friendly we shifted to reliance on employment (the act of working for organisations) and then within that, to renewed premium for government jobs, security forces and so on.

There is a reason why such sectors scored. Fascist outfits belonging to both the Right and the Left are devoted to organisation.

Regimes of that sort also know the untenability of their agenda and so invest in two things — keeping the public (especially political foes) on tenterhooks and securing their own position.

They cultivate loyalty. All this put liberal society on edge.

These developments took a toll on the confidence people had to author new, unconventional livelihoods and lifestyles.

A cocktail of belligerent ignorance and moneyed regression became our operating environment.

Backed by authority, it forced people to revert to the herd.

Thus, three decades after liberalisation kicked off, my friend’s son and niece — both born well after that historic shift in economic policy — find themselves newly off the beaten path for no fault than listening to their heart.

While earlier in the wake of economic liberalisation, we had the promise of money and liberal society, now we have just money.

Social liberalism got edited out. And bizarrely, we are now demographically a young country but thinking like an old one.

It felt good to catch up. So many things to talk of.

For that we should be grateful to the Right-Wing.

When damage is so much, there is no shortage of what was, is and could have been.