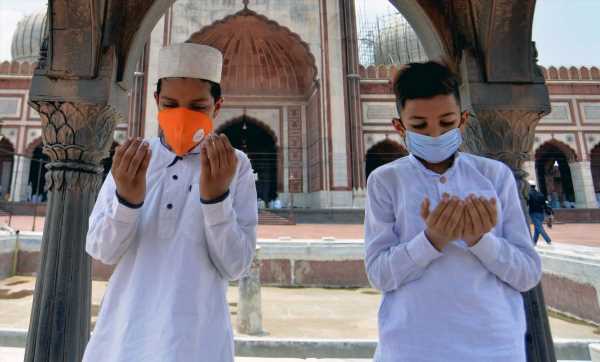 41 years ago, Dalits in Meenakshipuram converted to Islam, sending shockwaves through the nation.
A Ganesh Nadar/Rediff.com returns to the village to discover that past antagonisms lurk below the surface.

Meenakshipuram is a mid-sized village in Tirunelveli district in southern Tamil Nadu.

On February 19, 1981, 180 Dalit families of the village’s 220 families converted to Islam, sending tremours across the nation.

The converts alleged that upper caste Thevars in their village ill-treated them and there was no one to support them.

They felt that as Muslims they had a better chance of dealing with the upper castes.

After the conversions, then Bharatiya Janata Party president Atal Bihari Vajpayee traveled to Meenakshipuram with other BJP leaders to convince the villagers not to renounce their religion, but to no avail.

Twenty-five years after the conversions, when I visited this village in 2006, I found that the majority who had converted to Islam were better off than their brethren who had refused to convert, that their Hindu brethren were still wallowing in poverty while the Muslims had gone ahead.

The Muslims were ably supported by other Muslims in the district and had also taken brides from this community which raised their status.

41 years later, in October 2022, I paid another visit to this quaint village.

Karuppiah, 72, says it was not the Thevars, but the police who were the catalysts that triggered the mass conversion.

Some 10 km from their village, two murders had then taken place. Those killed were Thevars.

The police could not find the killers so they blamed the Dalits and said it was a caste-based killing.

Dalit youth were arrested and assaulted to make them confess to the double murders. The police also allegedly beat up young Dalit women who objected to their brothers being arrested.

In anger, Karuppiah says many Dalit villagers converted to Islam. After the conversions, Muslim leaders in Tirunelveli visited the village regularly and the police backed off. The murderers were never caught, Karuppiah adds.

Then prime minister Indira Gandhi sent a delegation of officials to find out what happened.

Twelve Dalit youth from the village who had not converted were taken to Delhi for a study mission.

“When they came back they could speak Hindi, but they did not learn anything else,” recalls Karuppiah with disdain.

The village has a primary school, where children could study up to Class 5. For further studies they had to go to the next village.

Chelliah and Hussain are brothers from the village. One converted while the other refused to do so.

“I wanted to honour my father and so I didn’t convert,” says Chelliah.

Ali, the panchayat leader, lives in the nearby village of Panpoli.

The other change in this village is that the Hindus call the village by its original name, Meenakshipuram, while the Muslims have renamed it Rehmat Nagar.

There is no demarcation between the two names, it refers to the same area.

Mohammad Taufiq, 25, is a graduate in Tamil. He is now preparing for entrance exams for a government job.

He has an interesting tale to narrate about his first day in college.

“When I told them my name was Mohammad they left it at that.

“My cousins from this village who are Hindus had to also tell them their caste.

“For the rest of the college year the Hindu boys were referred to with an casteist slur.

“They remained on the fringes of the college and were not admitted into most circles.

“They had to stick to their own caste group. The professors too ignored this obvious division.”

Inside the village, however, nobody talks about caste. There is no communal divide because they know they are all from the same family.

There is no river here and no lake. The village has a spring from where I can see a little water trickling down.

Bore wells bring up water from 300 feet under. There is no playground for the primary school.

Kareembhai, 69, who remembers when Vajpayee had come to talk to the villagers, says there are no caste feelings in the village.

“Let me tell you what changed our lives. As Dalits we did not know beyond our district. But as Muslims we discovered the Middle East. We came to know the land beyond our borders. Every family in this village has someone working in the Gulf.

“Money flows in and we have built concrete houses to replace our thatched huts. Jayalalitha has built houses here and also Karunanidhi, but no one reconverted.

“Why would we want to go back to being untouchables?”

Because of Gulf money they have marriage alliances from Muslims from all over Tamil Nadu.

“We never took money to convert, that rumour was circulated to defame us,” charges Kareembhai.

Meenakshipuram village has 50,00 voters, a majority of them Muslims. Kareembhai remarks that the Thiruvaduthurai Adheenam, the biggest landowner in the village, had decided to build a school.

“But someone from the neighbouring village stopped it,” Kareembhai alleges. “He told the Adheenam that we were the people who deserted Hinduism to convert to Islam and they should not spend Hindu money to build a school here. The school was built in the nearby village.”

The conversions took place 41 years ago, but past antagonisms, it appears, remain below the surface.