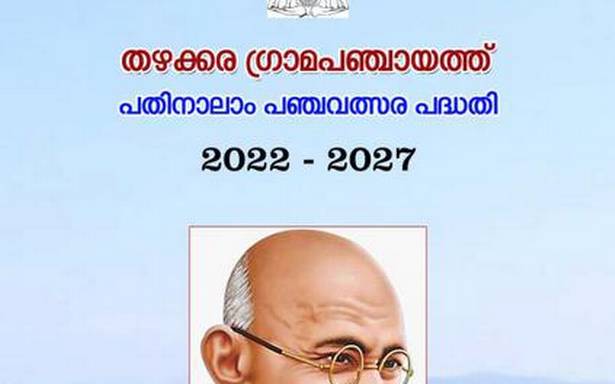 Thazhakara grama panchayat in Alappuzha district brings out document detailing the local body’s achievements over the last 25 years, its challenges and the way forward in connection with the formulation of the 14th Five-Year Plan

"It is mandatory for all local bodies to publish the status report. Be it agriculture, poverty alleviation, health or Scheduled Caste, Scheduled Tribe development among other sectors, the panchayat has accomplished great things in the past two-and-a-half decades. That said, a number of challenges remain and a lot more needs to be done. The report is both a progress card and a roadmap for sustainable development,” says Mr. Viswambharan.

The document details 13 different sectors. The agriculture sector witnessed some big successes during the period. Of the 13 paddy polders in the area, cultivation is being undertaken in 11 fields. In 2012-13, paddy was cultivated in 150 hectares (ha) in the local body limits. In less than a decade, the area under rice cultivation has been expanded to 384 ha. Rice production increased from 375 tonnes to 935 tonnes. Likewise, vegetable cultivation rose from 10 ha to 100 ha. The local body is producing 10,000 tonnes of vegetables annually.

The report notes that the potential of irrigation canals has not been fully tapped, while there is also excessive use of chemical fertilizers and the threat of climate change. It proposes to extend the area under paddy cultivation by providing high-yielding variety seeds. It suggests popularising fish farming.

As part of poverty alleviation, the panchayat provided houses to 73 families under the Livelihood Inclusion and Financial Empowerment (LIFE) scheme since 2018. In 1995-96, there were only 20 tarred roads in Thazhakara. The number of roads has now increased to 720. The number of anganwadis also rose from 11 in 1996 to 35.

The report calls for the implementation of a comprehensive project for providing potable water to all residents. To tackle the perils of climate change, the document suggests short- and long-term projects, including construction of bunds, measures to ensure flow of floodwaters and protection of the Achencoil riverbank.