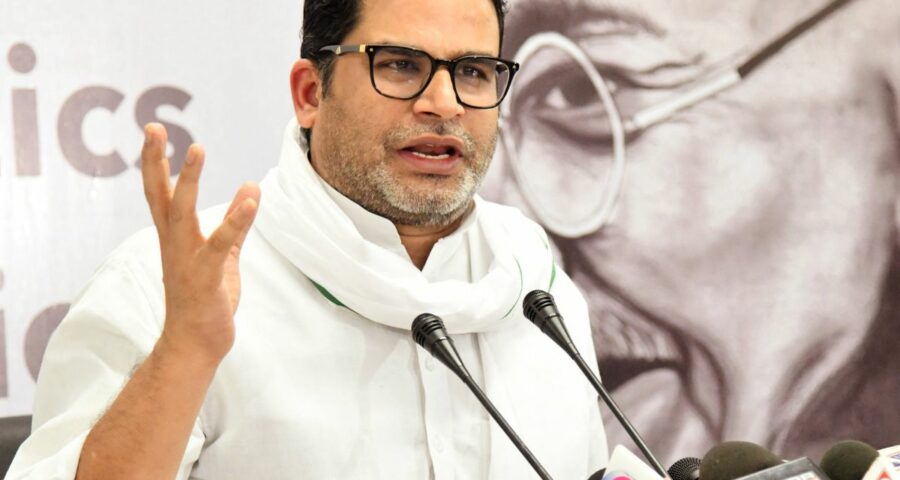 The JD-U, may be the BJP’s partner for now. But it is a party at all only because of Nitish Kumar.
The day Nitish Kumar exits, the JD-U will split into hundreds of pieces.
Obviously, Prashant Kishor is setting himself up as the vessel that will collect all the pieces and put them together in some sort of political instrument, explains Aditi Phadnis.

They were the ones who strategised, the ones who ideated moves in battles that were part of someone else’s war. And now, they’re ready to move on — still there to provide their service to anyone who needs it, but also work for themselves, instead of working for others.

There were many victories in between.

Last month, Kishor turned down a place in the Congress, and is currently helping the Telangana Rashtra Samiti ahead of the assembly elections in the state.

Kishor is yet to decide whether he will make a serious political intervention in Bihar in the form of an organised political party, or will continue to be a professional running I-Pac. But his announcement that he would start a padayatra in Bihar, without ruling out the possibility of the eventual launch of a political party, is pregnant with possibilities.

This was the man who, during the campaign for the 2015 assembly elections in Bihar, capitalised on Prime Minister Narendra Modi’s ‘DNA of Bihar’ remark and dispatched trucks full of Bihari nail filings and locks of hair to the PMO to enable the PM to fully understand the nature of the Bihari DNA.

There is ‘some problem with Nitish Kumar’s DNA’, Modi had remarked at an election meeting, referring to the frequent change of political allegiance by the Bihar chief minister.

I-Pac turned that remark to represent a slur on Biharis.

That, and other judicious moves, helped Nitish Kumar and then alliance partners, the Rashtriya Janata Dal and the Congress, come to power in Bihar, upsetting the Bharatiya Janata Party’s apple cart badly.

When this happened, Kishor was hugged and feted publicly by Nitish Kumar: Even more fervently as the results began pouring in, indicating a big victory for the Mahagathbandhan.

But a cameo incident illustrates the tension between the almost-politicians and politicians.

When the results began coming in during the early part of the day and it seemed from the postal ballots that the BJP was winning, Lalu Prasad took a light swat at I-Pac’s exertions when he called Kishor and said: ‘Tension not’.

The import of Prasad’s mocking reference was that Kishor may think he contributed to the victory, but he should leave politics to the politicians.

What makes Kishor and I-Pac think they can do what professional politicians can do, better?

Some of those who have worked with Kishor but have left I-Pac (the attrition rate in the company, started in 2013 as Citizens for Accountable Governance, is quite high) say Kishor’s announcement of the padayatra is misdirection.

There is no doubt that the breakdown of his relationship with the Congress is a blow (in a perfect world, Kishor would have liked to be the tsunami that would have broken everything down in the Congress, only to rebuild it from scratch).

But, they say, it is not clear who dumped whom. In the circumstances, Kishor and I-Pac are keen to put it all behind them and create the optics that they’re around and ready to fight another day.

Anything else will affect their revenue stream as a company.

But can an organisation — and a leader — advising others on elections jump into the fray and become a successful election-winning machine itself?

Obviously Kishor has given the matter some thought.

There is political space in Bihar that is aching to be filled.

The last electoral test of the BJP, the Bochaha assembly by election (April 2022), ended in failure.

In an alliance rarely seen before, OBCs (Other Backward Classes), the Nishad (mallah) community, and the upper caste Bhumihars came together to defeat the BJP. The seat was won by the RJD.

Lalu Prasad’s failing health does not allow him to play a meaningful role in the state. His children don’t seem to be equal to the leadership task: Bochaha was won via caste alignments formed on the basis of opposition to the BJP, not necessarily support for the RJD.

The Janata Dal-United, or JD-U, may be the BJP’s partner for now. But it is a party at all only because of Nitish Kumar: The day Nitish Kumar exits, the JD-U will split into hundreds of pieces.

Obviously, Kishor is setting himself up as the vessel that will collect all the pieces and put them together in some sort of political instrument.

But he needs to create a buzz around himself and the party he is almost certain to launch.

It is hard to see what effect Kishor and I-Pac will have on Bihar politics. Will the intervention give rise to another Aam Aadmi Party-like intervention? But Bihar is neither Punjab, nor Delhi.

And what will Kishor’s own place be in all this? His former associates concede he is a brilliant political strategist with the capacity to absorb and process large chunks of election data.

But, they say, he needs to work on his skills as a manager of men.

Ultimately, his associates say, Kishor is a public campaign man who is an ideological agnostic and believes in The Message and not necessarily The Man.

Organisations can be cobbled together on the basis of one or the other. But for them to endure, you need both.