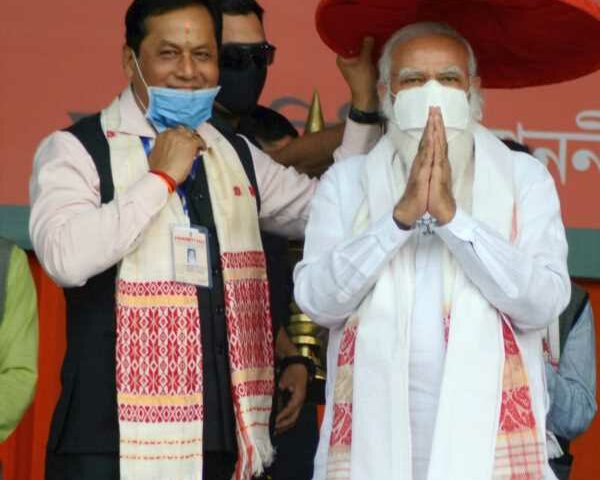 The party is less forthcoming about who the chief minister will be if it stays in power, observes Aditi Phadnis.

In 2016, the combined backing of Rashtriya Swayamsevak Sangh leader Ram Madhav and the Modi-Shah leadership at the Centre propelled Sarbananda Sonowal to become chief minister of Assam.

This time, there is no such announcement. Ram Madhav is out of the Bharatiya Janata Party and back in the RSS.

Neither Narendra Modi nor Amit Shah is saying anything about the chief ministership. So what is to become of Mr Sonowal?

As a young man, Sarbananda Sonowal embraced identity politics and became president of the All Assam Students Union in 1992, a post he held till 1999.

He then took the next logical step of joining the Asom Gana Parishad in 2001 and was elected MLA the same year.

AASU and the AGP were based on the ‘sons of the soil’ model.

Mr Sonowal refined this by expanding and developing the Assamese identity to include tribal student groups so that Assam would be Ahom — where the domination of the indigenous would prevail.

The thrust was to counter the Congress argument — that so long as the Ali (Muslim), Kuli (tea estate worker), and Bangali (Bengali Hindu, usually clerk and petty trader who came to Assam when Bangladesh was carved out) were with the Congress, the party could never lose Assam.

But the AGP was a sinking ship and as the leadership divided and sub-divided, Mr Sonowal chose the only option available to a professional politician: He joined the BJP.

Many party colleagues followed him into that party.

He was appointed president of the BJP’s Assam unit in 2012, which is a pretty rapid promotion: After all, despite years of work by the RSS, the BJP had no real place in Assam.

In that sense, he was a product not of the Vajpayee-Advani BJP, but the Modi-Shah BJP.

The rest of the story is well known.

Mr Sonowal challenged the Illegal Migrants (Determination by Tribunals) Act, which was struck down by the Supreme Court as unconstitutional in 2005.

Mr Sonowal continued to be Assam BJP chief till his return to the Lok Sabha in the 2014 polls.

He was made minister of state in the Modi government.

He was appointed Assam unit chief again in 2015, a year ahead of the state polls.

There was a slight setback. The BJP brass in its wisdom decided to import Himanta Biswa Sarma from the Congress into its party.

Around the same time, Louis Berger, an American firm, had admitted in a court in the United States that it had bribed officials and politicians across the world to win projects.

It said it had bribed Indian officials in Goa and Assam for water development projects in 2010, when Mr Biswa Sarma was heading the relevant ministry in the state.

In Goa, Churchill Alemao was arrested. In Guwahati, no one was nabbed and the files were ‘lost’.

Two politicians held a press conference, highlighting the charges: Mr Sonowal and Kiren Rijiju. Both were from the north east. Efforts were made to raise questions about the Saradha scam and Mr Biswa Sarma’s role in it.

This was a departure from tradition. The elections followed and the party got 45 per cent of the vote.

If Mr Biswa Sarma felt cheated, he opted not to make an issue of it and sulk.

This time, however, the party is less forthcoming about who the chief minister will be if it stays in power.

‘Mr (Biswa) Sarma was not keen to contest the election, but the party decided that Mr Sonowal would not be projected as the chief ministerial candidate and the BJP would fight the election under the joint leadership of Mr Sonowal and Mr Sarma,’ Assam’s BJP chief Ranjit Dass, told the NDTV news channel before the election.

Mr Biswa Sarma has been proactive. He is the one who moved legislation putting fetters on microfinance institutions in Assam: Inability to pay microfinance loans has been a big disruptor in politics, especially in the BJP’s catchment area.

He is dropping hint after hint that it is his turn now. His route to politics was not that different from Sonowal’s — AASU. But Mr Biswa Sarma was lucky enough to have Bhrigu Phukan as his mentor: The mentor he turned around and defeated in the 2001 assembly elections

But now things are different. True, the Congress has lost its most important general, Tarun Gogoi.

But it now has a clear and undeniable alliance with the Badruddin Ajmal-led All India United Democratic Front.

The BJP’s vote share growth in Assam is impressive. But then why is it fighting shy of naming a chief minister?