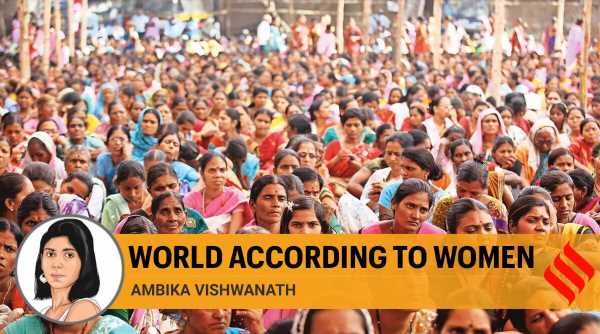 Data indicates that the inclusion of diverse voices makes for better options in decision making and is no longer simply a virtuous standard to follow. On March 31, the World Economic Forum released its annual Gender Gap Report 2021. India had slipped 28 spots to rank 140 out of the 156 countries covered. The index is based on four dimensions, where political participation maintains the largest gap globally, worse than the 2019 edition of the report. Within the 156 countries covered, women hold only 26 per cent of parliamentary seats and 22 per cent of ministerial positions. India in some ways reflects this widening gap, where the number of ministers declined from 23.1 per cent in 2019 to 9.1 per cent in 2021. The number of women in Parliament stands low at 14.4 per cent.

In a time when 104 countries still have laws preventing women from certain types of jobs, and over 600 million women live in countries where domestic violence is not punishable, a gendered approach has to be mainstreamed into broader policy objectives. This means going beyond conventional considerations of development assistance and domestic policies to include core areas of foreign policy, economics, finance, trade and security. This also means that along with increasing representation, women and marginalised sections of society need to have a voice to provide alternative perspectives to policy making.

A feminist foreign policy as a political framework explores this very realm, first introduced and advocated by Sweden in 2014. Feminist approaches to international affairs can be traced back to the 1980s. In many ways this translated to a bottom-up development approach, especially with a donor-based mindset that benefitted the recipient, albeit often with caveats. While this slowly changed in the 1990s, core areas of security and diplomacy were still the domain of men, and remain so. The realisation that it is not only necessary to include women in peacebuilding and peacekeeping but the wider gamut of diplomacy and foreign and security policy is growing, with data indicating that the inclusion of diverse voices makes for a better basket of options in decision making and is no longer simply a virtuous standard to follow.

Since Sweden embarked on this path, several other countries — Canada, France, Germany and, more recently, Mexico — have forged their own, adopting either a feminist foreign policy or a gendered approach to aspects of policy making. However, the current conversation around a feminist/gendered foreign policy is still largely in small circles in North America and Europe. Greater diversity in thinking will allow for a global policy to be tailored and thus operationalised in a wider geography, accounting for vastly divergent social norms and practices, and lived histories.

As a non-permanent member of the UNSC and recently elected to the UN Commission on the Status of Women for a four year term in September 2020, India has a key role to play. Gender considerations in India’s foreign policy are not new. Though located largely under the development assistance paradigm and peacekeeping, these have been incredibly successful. From 2007 when India deployed the first ever female unit to the UN Mission in Libya to supporting gender empowerment programmes through SAARC, IBSA, IORA and other multilateral fora, our programmes have been targeted at making women the engines for inclusive and sustainable growth. Many of our overseas programmes in partner countries have a gender component, as seen in Afghanistan, Lesotho and Cambodia. At home, 2015 saw a gender budget exercise within the MEA towards development assistance.

What is needed is a more formal designed approach that goes beyond a purely development model to wider access, representation and decision making. The WEF report and other similar indices is a call to do better on the domestic front; no matter how “feminist” our foreign and security policy might be, without balance at home it will not last.

In September 2020, India’s Permanent Representative to the United Nations, Ambassador T N Trimurti said our election to the CSW was a “ringing endorsement of our commitment to promote gender equality and women’s empowerment in all our endeavours”. We must now go further to sensitise and shape global discussions around gender mainstreaming. Our gender-based foreign assistance needs to be broadened and deepened and equally matched with lower barriers to participation in politics, diplomacy, the bureaucracy, military and other spaces of decision making. In doing this, India can easily claim a new unique feminist foreign policy adding to and smartly shaping the global conversation.

This column first appeared in the print edition on April 9, 2021 under the title ‘World according to women’. The writer is co-founder and director, The Kubernein Initiative