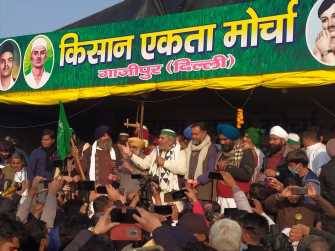 ‘When a person is very furious, it does give way to tears.’
‘It was in this emotional state of mind that he took a decision to not vacate the Ghazipur border without fearing the consequences.’

Manu Tyagi — Rakesh Tikait’s sarthi (the person who chauffeurs a vehicle and helps navigate the difficult road), who has been by the side of the national spokesperson of the Bharatiya Kisan Union — and Rajveer Singh Jadaun, president of the BKU’s Uttar Pradesh unit who was part of the lakh-strong mahapanchayat organised on Friday afternoon at Muzaffarnagar to express support to Tikait after his video where he cried on Thursday evening went viral — tell Prasanna D Zore/Rediff.com about the mahapanchayat and what made the tough farmer leader get emotional.

Manu Tyagi: ‘He is feeling much better today’

Everything has returned to normalcy right now.

Yesterday (Thursday) evening the situation was quite tense as some goons did some slogan shouting. But we made them see sense and sent them back. The police helped calm down tempers.

The UP police had called in 4,000 men from the Rapid Action Force, the Provincial Armed Constabulary, but we stood our ground firmly.

He (Rakesh Tikait) is feeling much better today than what he went through yesterday. His blood pressure had shot up, but he is doing quite well today. He had had a bad throat since yesterday, but it has improved today.

He was quite emotional yesterday evening while addressing the farmers; there were reports of his imminent arrest, but he didn’t budge from his place on the stage.

Rajveer Singh Jadaun: ‘You will see how the crowd swells at the Ghazipur border’

At the mahapanchayat we have decided to march towards Delhi. We will be joining other protests at the Ghazipur border to support Tikait sahab.

We organised the biggest of all the Mahapanchayats today, which was attended by people in lakhs.

All those who attended this Mahapanchayat pledged that they will be moving towards Ghazipur. We will add our might to those already protesting there.

Rakesh Tikait is our leader and under his guidance we are going to stand with him.

We will march to Ghazipur in batches according to our convenience and show the Delhi government how strong farmers can become when faced with injustice. 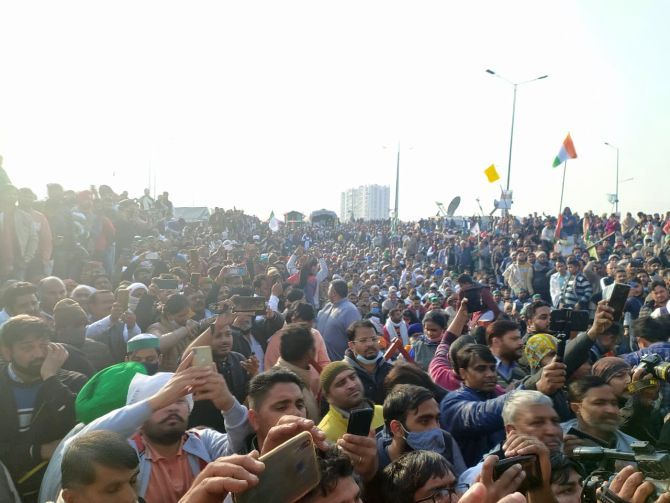 The farmers are angry at how they are playing games with our lives and livelihoods; they are also angry that their leader and India’s farmers are being made to cry so that some big corporates can laugh all the way to their bank.

Every district organised a Mahapanchayat today (Friday) in support of Tikaitji and from tomorrow (Saturday) you will see how the crowd swells at the Ghazipur border from this very moment.

He (Tikait) became emotional because a rustic farmer like him could not fathom the depth to which those in power can conspire against him to break the farmers’ agitation.

When a person is very furious, it does give way to tears. It was in this emotional state of mind that he took a decision to not vacate the Ghazipur border without fearing the consequences.

We are going to Ghazipur to express our support to our leader and tell him how much we love him.