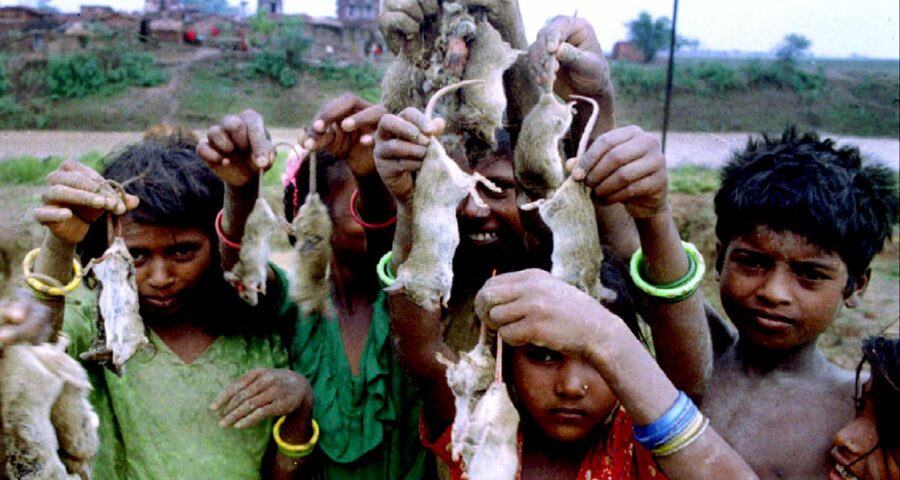 ‘They are not ready to take the vaccine.’
‘They fear that if they do, they will die.’
M I Khan reports.

Unlike the scramble among the rich, well-off and middle class to get vaccinated, the poorest of the poor in Bihar, belonging to the Musahar Dalit community, are not keen on getting vaccinated.

In fact, they have refused to do so at different places during the ongoing vaccination drive across the state.

Most of them claim that the COVID infection has not spread among their community and no casualty has been reported. They also fear taking the vaccine will result in fever, sickness and even death.

Due to the acute shortage of vaccines in Bihar, the ongoing vaccination drive is slow and vaccination for the 18-45 age group has almost come to a halt in the last six-seven days.

Mahua Devi, a middle-aged woman, sits on the mud floor outside her one room thatched hut near an open, dirty drain, awaiting the return of her husband, who went to a nearby village to try and earn some money so that he could buy rice and potatoes to feed his family.

Her challenges are managing hunger and an uncertain livelihood, not COVID and vaccination.

“Hum log garib hai lekin andar se mazboot hai, kahe ki hum chuha, suaar aur ghenga khate hai. Corona kuch nahi karega, hum corona-phorona se duarte nahi hai. Suee ya tika kyon lenge? Hum log vaccine nahi lenge (We may be poor but we are strong because we eat rats, pigs and small fish. Corona does not affect us. We are not afraid of it. Why should we take an injection or a vaccine? We won’t take it),” says Mahua, who lives in Dhibra Musahar Toli, about 12 km from Patna.

Mahua is a Musahar Dalit, one of the most marginalised and oppressed communities in Bihar, and she is not alone.

Thousands of Musahar men and women living in hundreds of Musaharis or Musahar tolis (small hamlets) across Patna, mainly in rural and semi-urban localities, have reportedly refused to take the COVID vaccine.

Barely one-and-a-half kilometres from this village lies another Musahari; residents Chotan Manjhi and Minu Devi says no one has been affected by COVID in their toli so people are reluctant to take the vaccine.

“In the last two months, no one has reported high fever, cough and weakness. We have been living as usual without wearing masks and the COVID infection has stayed away from us.”

Ranjeet Manjhi, who lives in Hinduni Musahar Toli, says he has not heard of a single case in his community.

“We are poor, but our immunity is strong as we live a difficult life and struggle for survival. We eat all kinds of meat and consume liquor frequently. COVID infection cases were reported in dozens of neighbouring villages but not in any Musahar toli.”

At Jamsaut Musahar Toli under Danapur block — which Microsoft Co-founder Bill Gates and his now estranged wife Melinda French Gates had visited during one of their India visits 10 years ago — Sajan Manjhi and Ravinder Manjhi say the same thing.

“In one year, two COVID waves claimed thousands of lives in the state, but not a single life from our community. We are safe due to our food habits and lifestyle.”

Like any other Musahari, Jamsaut is a poverty-stricken and foul-smelling ghetto. This deprived community, which got its name due to the circumstances that once compelled them to eat rats, still lacks basic health awareness. For centuries, they have lived on the outskirts of the powerful, landed, upper- or dominant-caste villages in Bihar. Sudha Verghese, who has been working to improve their condition for over three decades, says there have been no COVID cases reported among Musahars till date. According to official records, not a single Musahar has died of COVID.

“It is true,” she says, “that they are not ready to take the vaccination. They fear that if they do it, they will die. This is the result of misconception, rumours and a total lack of awareness about how deadly COVID can be.

“I have made enquires in about five-six blocks including Danapur, Phulwari Sharif, Bihta, Maner and Punpun in rural Patna, where I am working among the Musahars. So far, no positive cases nor any casualty from COVID has been reported among the community.”

“I spoke with dozens of men and women from the community in more than half a dozen Musahar tolis in Danapur block and they said they will not take the vaccine, citing different reasons.”

“I don’t have any scientific research or study that proves their immunity is stronger compared to others who are socio-economically well off,” says Verghese.

“What is disturbing that the Musahar people rarely wear masks. They don’t follow safety measures like social distancing, hand washing or sanitisation either. I have no idea how they are protected from COVID so far.”

Verghese’s biggest fear is that if a community spread takes place among the Musahars, they will be badly hit. The government clearly needs to convince them to vaccinate.

Father Anto Joseph, who is working for the development of the community, says most Musahars are still unaware of the impact of COVID.

This landless Dalit community, derogatorily referred to as ‘rat eaters’ by the upper castes, are still considered untouchables. Their socio-economic status has barely changed in decades.

In Bihar, 96.3 per cent of Musahars are landless and 92.5 per cent work as farm labourers. These figures have not changed since the 1980s.

Literacy in the community is 9.8 per cent, the lowest among Dalits in the country. Barely one per cent of Musahar women are literate.

There are estimated to be more than three million Musahars in Bihar, who are forced to live in unhygienic conditions, surrounded by pigs and open piles of filth and garbage.

*Kindly note this image has been only been posted for representational purposes.