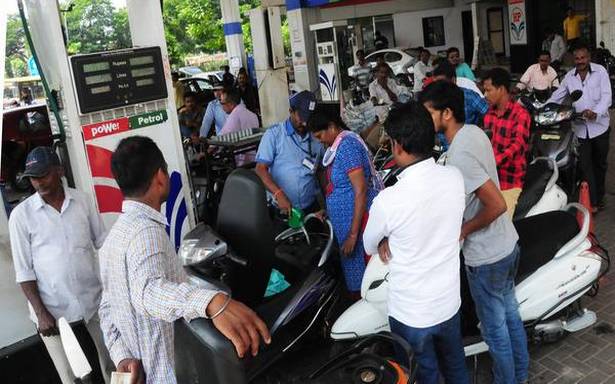 BJP State president Somu Veerraju said on Sunday that the government’s financial position was in shambles.

Instead of taking the necessary course corrections, it resorted to mud-slinging on the Centre, which was evident from the “false claims” made by it with regard to VAT on petrol and diesel, among other things, Mr. Veerraju said while addressing the Bharatiya Janata Yuva Morcha (BJYM) State office- bearers meeting here.

He insisted that the State government had the scope to reduce the local tax on petrol and diesel in the wake of the Centre effecting a cut in the excise duty, but it cited various excuses for not doing a thing that was in its domain.

Mr. Veerraju questioned what prevented the Andhra Pradesh government from bringing down the VAT on petrol and diesel when several States did so, and took objection to the “spreading of lies” by the State on the matter.

He asserted that the Centre had come to the rescue of A.P. during the COVID-19 crisis and at other times, but the State had been on the job of tarnishing the Central government’s image right from the day it had come to power.

The YSRCP had cheated the people by promising at the time of elections that it would strive to secure Special Category Status (SCS) and to carry the capital project forward, and completely ignoring them later, he alleged.

He said the National Highway network in A.P. was strengthened by the Centre, which had given ₹2,500 crore for the development of Amaravati and facilitated the sanction of loans amounting to ₹4,700 crore. The State government owed an explanation for all its failures, he added.