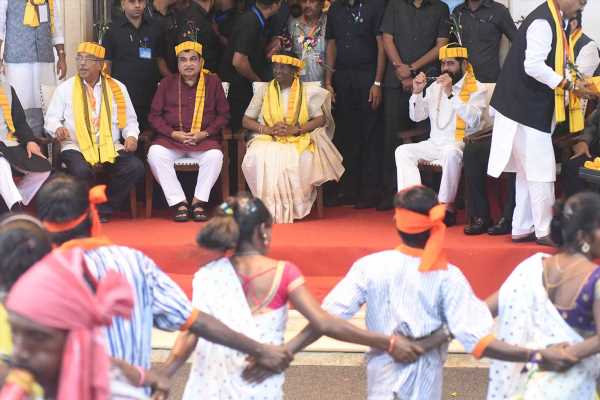 ‘Due to the huge unemployment among displaced Adivasis they undertake any job that comes their way even if it means working and living in hazardous conditions.’
‘The situation is such that out of every five tribals who migrate in search of employment only three come back alive.’

Rajendra Dhedya Gavit is a two-time member of the Lok Sabha from the reserved Scheduled Tribe constituency of Palghar in Maharashtra.

“Neither the central nor the state government offer a fair and just resettlement and rehabilitation programme to Adivasis. Their rehabilitation is haphazard and piecemeal,” Gavit tells Prasanna D Zore/Rediff.com.

“As a nation we have moved away from the goal of economic and social development of Adivasis; instead our economic and developmental policies have led to their uprooting from their natural dwellings,” says the MP, highlighting what Adivasi communities expect from India’s first tribal President.

That an Adivasi woman has been elected President adds another feather in the cap of our Republic when we are celebrating the Amrut Mahotsav (75th year) of our Independence.

We are glad that the nation has accorded the highest honour of the nation on a tribal woman at this important juncture in our history. That the Scheduled Tribe community is a happy lot today is only natural.

Expectations from the President

Now that Droupadi Murmu has become President, the Scheduled Tribes are looking on her elevation with tremendous amount of hope for solving the problems we have been facing in the last 75 years of our independent existence.

While sad, it is a fact that the Adivasis are still not enjoying the fruits of development. There are not enough pucca roads and bridges; availability of electricity in the heart of jungles and far corners of the country where they reside is still a distant dream.

The Scheduled Tribes are still the worst affected in terms of hunger deaths or deaths due to malnutrition.

We hope that as President she will direct the Government of India to give prime importance to these problems and work on solving them on a war-footing.

She must ask the government to prioritise the fulfilling of gaps related to paucity of health, power and physical infrastructure without causing huge displacement of Adivasis. Wherever they face displacement their rehabilitation should be just and fair.

As President she can only guide the government in bringing about a meaningful change in the lives of her Adivasi brethren without disturbing their natural habitat.

She doesn’t wield the real executive powers that are concentrated in the hands of the prime minister and his council of ministers. But we definitely expect the President to goad the government in fulfilling the promises they have made to Scheduled Tribe communities across India.

The role we can play

Representatives of the people like us (the elected representatives belonging to the Scheduled Tribes) will also have a role to play in highlighting the problems of our brethren to the President and the prime minister.

The four Lok Sabha members from Maharashtra belonging to the Shiv Sena and BJP are planning to meet Droupadi Murmuji soon and will keep writing letters to her that could further strengthen her efforts to boost the standard of living, the health and material well-being of the Scheduled Tribes.

We must not forget that upliftment of the backward people of India is a collective responsibility of not just one person, but the entire nation.

We (the four Scheduled Tribes MPs from Maharashtra) will discuss unsolved issues faced by the Adivasis and request her to emphasise on prioritising them and find ways and means for their quick resolution. The problems faced by Adivasis in Palghar

The Adivasis in the Thane-Palghar belt are still grappling with the issue of malnutrition deaths. Hunger deaths are the biggest curse that afflicts the Adivasis here as well as in other parts of Maharashtra.

The other big issue faced by the Scheduled Tribes in this belt is that of migration in search of jobs to neighbouring states of Gujarat or in the metropolitan regions surrounding Palghar.

Due to the huge unemployment among displaced Adivasis they undertake any job that comes their way even if it means working and living in hazardous conditions. The situation is such that out of every five tribals who migrate in search of employment only three come back alive.

They fall prey to the living and working conditions they encounter while doing their jobs. They easily get exploited by people who offer them jobs and are made to work for 18 hours a day.

We would want the President to look keenly into the issues like migration, living and working conditions of Adivasis, the issue of displacement and resettlement and rehabilitation of project affected people.

Due to rapid urbanisation and industrialisation it is imperative for our country to build huge dams by accumulating waters along the valleys and forests where mostly Adivasis reside. This leads to utter destruction of their natural surroundings, lives and livelihood.

The well-being of Adivasis is often times neglected when such developmental projects are undertaken. The people affected because of the construction of the Narmada dam are yet to get fair resettlement and rehabilitation.

The lives of Adivasis, their occupations, their social and economic life revolves around their natural surroundings.

We worship nature. When such people are rehabilitated in tiny tenements of 10×10 they face the problems of safekeeping their cattle, poultry and livestock wealth. They face huge financial losses due to displacement from their natural surroundings.

Neither the central nor the state government offer a fair and just resettlement and rehabilitation programme to Adivasis. Their rehabilitation is haphazard and piecemeal.

As a nation we have moved away from the goal of economic and social development of Adivasis; instead our economic and developmental policies have led to their uprooting from their natural dwellings.

Droupadi Murmu’s elevation as India’s President has given a huge boost to our sense of self-respect and we will definitely look forward to a President that actively plays a role in the overall well-being of Adivasis.

We look forward to Droupadi Murmu playing an active role in providing permanent and sustainable employment opportunities for Adivasi women. We are sure she will direct the Union government to work towards the betterment of our fellow brothers and sisters.