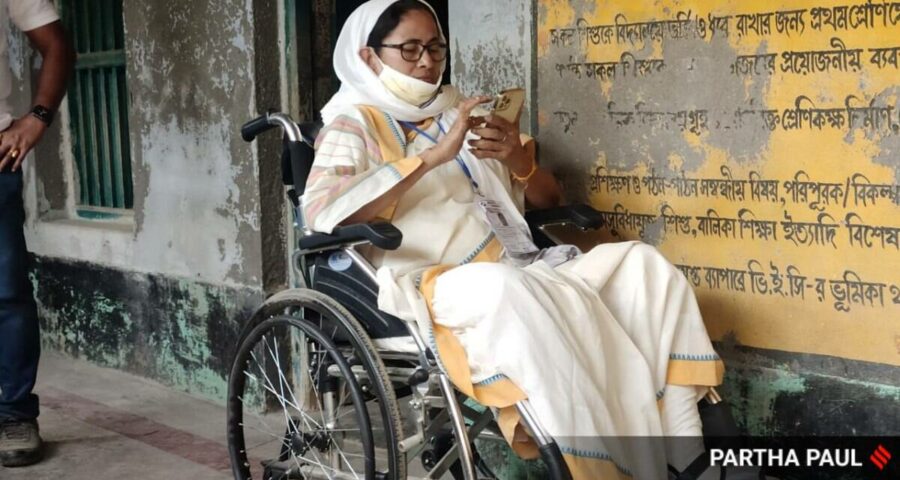 Sporadic violence and minor clashes were reported from various constituencies, including the high profile Nandigram, where chief minister Mamata Banerjee is locked in an electoral battle with her former lieutenant Suvendu Adhikari now with the BJP. 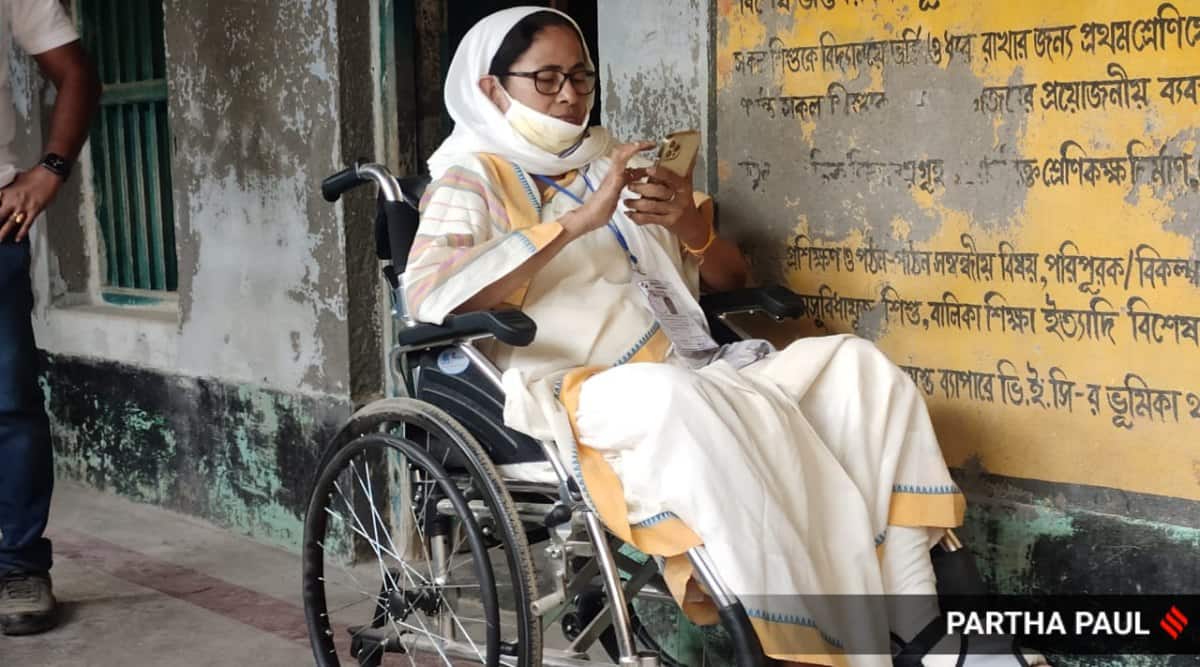 Heavy voter turnout amid sporadic incidents of violence marked the second phase of Assembly elections in West Bengal on Thursday, as Chief Minister and TMC supremo Mamata Banerjee slammed the Election Commission (EC) over inaction to the complaints filed by her party.

Despite the deployment of heavy security along with Section 144 in place, stray incidents of violence were reported from West Bengal’s Nandigram seat –– where Banerjee is locked in a high-stakes contest against protege-turned-adversary Suvendu Adhikari of the BJP –– that went to the polls along with 29 other constituencies.

Among the complaints lodged by the TMC were allegations of ‘booth capturing’ and massive fake voting at Boyal in Nandigram. “We have lodged 63 complaints since morning. But not a single action has been taken. We will move court over it. This is unacceptable. The EC is working as per Amit Shah’s instructions,” PTI quoted Banerjee as saying while sitting outside booth number 7 at Boyal in Nandigram, where her party workers alleged many voters were unable to cast their votes. “Goons from other states are creating ruckus here,” she said.

In the Boyal area, villagers too alleged that BJP supporters had stopped them from going to the polling booths. Both Banerjee and Adhikari visited various polling booths in Nandigram to take stock of the situation after scattered reports of violence and booth ‘jamming’. As soon as the chief minister reached Boyal, BJP supporters chanted “Jai Shri Ram” slogans. Supporters of BJP and TMC allegedly then indulged in violence, as the TMC leaders demanded re-polling in the booth number 7, reported PTI. Police and Rapid Action Force (RAF) rushed to the spot to control the situation, amid incidents of alleged stone pelting. The saffron party leaders, however, have denied the charge. BJP state president Dilip Ghosh dubbed the allegations as baseless. “It seems she (Mamata) has accepted the defeat,” he added. 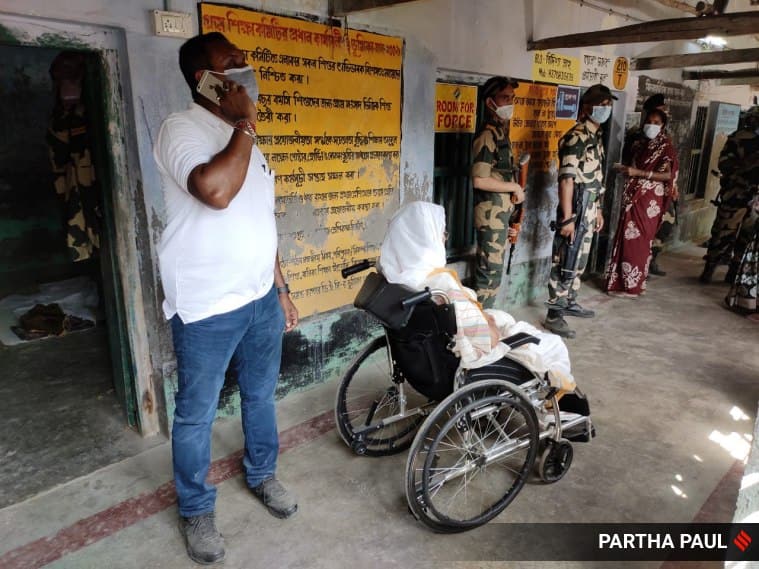 The poll body has sought a detailed report of the incident from the administration.

TMC supremo Mamata Banerjee said that she had called Governor Jagdeep Dhankhar and a senior EC official to inform them about certain poll-related issues, but did not divulge the details. “Yes, I have spoken to the Governor and an EC special observer. I cannot reveal what all I discussed with them,” Banerjee told reporters after coming out of the polling station. According to Trinamool sources, Banerjee had called Dhankhar from a polling booth in Nandigram and alleged that supporters of her party were not being allowed to cast their ballots by the BJP  workers. The saffron party leaders, however, have denied the charge.

Confirming that he received a call from Banerjee, Dhankhar said officials concerned have been intimated about the “issues” flagged by her and necessary steps would be taken to ensure that the law order is in place. “Issues flagged @MamataOfficial a while ago on phone have been imparted to the concerned…..There is full assurance of the concerned to adherence to rule of law,” tweeted Dhankhar, who has had frequent spats with the TMC government since he took charge in 2019. “Am confident all will act in right spirit and earnestness so that democracy flourishes,” he added. Meanwhile, two deaths were reported from the Medinipur area on the poll day. A Trinamool Congress worker was allegedly stabbed to death in West Bengal’s Paschim Medinipur district on Thursday, hours before polling started in the area, the police said. Forty-eight year-old Uttam Dolui was at a local club in Hariharpur in the district’s Keshpur area along with a few others when he was allegedly attacked with sharp weapons by 10-15 people, they said. Dolui died on the way to a hospital. The incident triggered tension in the area with Dolui’s family blaming the BJP “goons” for the attack. They alleged that the saffron party did this to create tension in the area and intimidate voters ahead of the polling. The BJP, however, dismissed the allegations, saying they have no reason for resorting to violence as they are confident about their win in the Keshpur seat. Deputy Election Commissioner Jain said that a report has been sought from district authorities over the incident.

A BJP worker was also found hanging at his home in Nandigram in Bengal’s Purba Medinipur district, triggering unrest in the area, police said. BJP leaders alleged that the deceased, Uday Dubey, was under tremendous stress as he was receiving threats from the TMC after he attended a roadshow of superstar Mithun Chakraborty who had campaigned in the area to garner support for BJP candidate Suvendu Adhikari on March 30.

The party alleged that he could also have been hanged to death by TMC “goons”. TMC denied the charges and slammed the BJP for indulging in politics over a death. “Dubey killed himself due to a family problem,” a senior TMC leader claimed. A case of unnatural death has been lodged, and the exact cause could be ascertained after the post-mortem report is received. 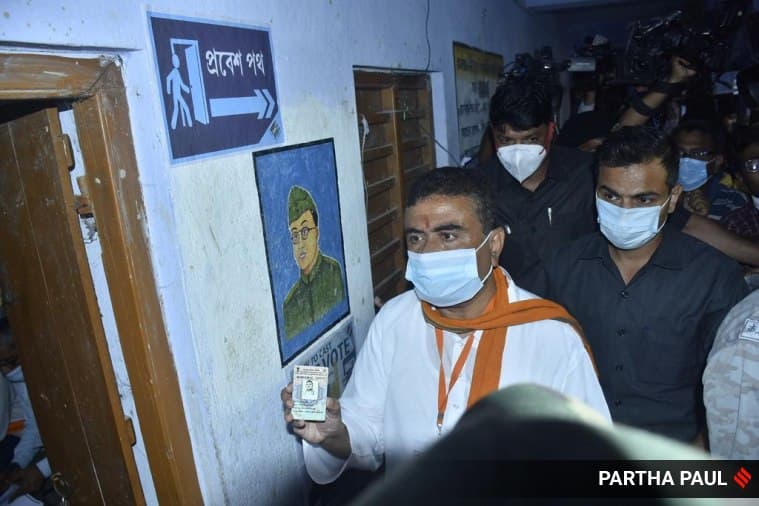 Meanwhile, BJP candidate Suvendu Adhikari cast his vote soon after polling began in Nandigram. Adhikari, who had triggered insider-outsider debate while claiming to be the “Bumiputra (son of the soil)” of the constituency, said he is confident that Banerjee will lose.

“I have a very old relationship with the people of the area. I have a personal relationship with almost every person in Nandigram. Pretty confident that I will win the election,” Adhikari said. “Entire villages have come out to vote in favour of the BJP,” he added. He claimed that the TMC has failed to depute agents in all the booths. “It shows that Mamata Banerjee will not be able to win the elections,” he said.