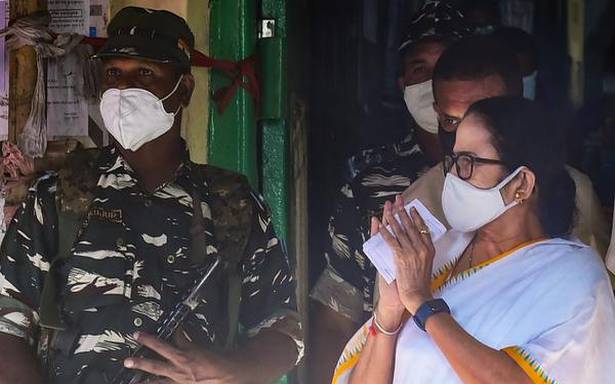 West Bengal Chief Minister Mamata Banerjee won the Bhabanipur Assembly bypoll on Sunday by a record margin of 58,832 votes against her nearest rival Priyanka Tibrewal of the Bharatiya Janata Party (BJP). This victory makes Ms. Banerjee a member of the West Bengal Legislative Assembly and will allow her to continue as Chief Minister of West Bengal. She had contested the Assembly poll from Nandigram and lost to BJP’s Suvendu Adhikari by a margin of 1,956 votes. She was unanimously elected Chief Minister by the Trinamool Congress legislature party in May 2021.

“The numbers of voters at Bhabanipur are relatively less and about 1.15 lakh votes were polled this time. This time we have won by a margin of 58,832 votes,” Ms. Banerjee told mediapersons outside her residence. The Chief Minister said the results would provide her encouragement to work more for the people of the State.

Ms. Banerjee had represented Bhabanipur seat in 2011 and 2016. In the 2021 Assembly poll, Trinamool Congress candidate Sobhandeb Chattopadhyay had defeated BJP Rudranil Ghosh by a margin of 28,790 votes.

In 2011, the TMC chairperson had won the Bhabanipur with a margin of over 54,000 votes. Highlighting that the margin of victory had surpassed all previous records, the Chief Minister said that in every ward of the constituency she had won on this occasion. She said that about 46 % of the electorate of the constituency were “non-Bengali” who also overwhelmingly voted for her. The BJP fielded Ms. Tibrewal who secured about 25,000 votes. Elections to Bhabanipur and two other constituencies Jangipur and Samserganj were held on September 30. Counting of votes is also going on at Jangipur and Samserganj and Ms. Banerjee claimed that her party nominees were leading on both the seats.

West Bengal BJP president Sukanta Majumdar also congratulated Ms. Banerjee on her victory. Mr. Majumdar said that only 57 % voters had exercised their franchise at Bhabanipur and also thanked the voters who voted for the BJP at Bhabanipur.

The Trinamool Congress chairperson also announced candidates for bypolls for three of the four seats that are scheduled in the first week of October. Mr. Chattopadhyay, who had resigned from Bhabanipur to allow the Chief Minister to contest the bypolls, will contest from Khardah seat in North 24 Parganas and Udayan Guha will contest from Dinhata in Cooch Behar district. The TMC has nominated Braj Kishor Goswami from Sanntipur. The BJP has won Dinhata and Santipur in the 2021 Assembly polls, but two sitting MPs Nisith Pramanik and Jaganath Sarkar did not took oath as MLAs from the respective constituencies.