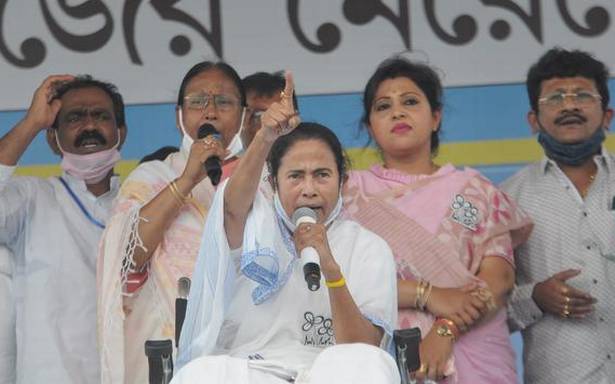 Entire thing was planned by Amit Shah and Modi was aware of the situation, she says

A war of words over the Sitalkuchi firing continued to rage on Monday. Chief Minister Mamata Banerjee assured the voters that she would not spare those responsible for the firing and urged the Election Commission to ban State BJP president Dilip Ghosh.

Mr. Ghosh had warned on Sunday of more “Siltakuchi like incidents” if the “bad boys of Trinamool Congress” do not abide by the law.

“State BJP president is saying Central forces should open fire… Do they have anything in their heads? Those who speak about opening fire should be banned,” the Chief Minister said at a public meeting on Monday. TMC leader Abhishek Banerjee also played a recording of Mr. Ghosh’s speech at a rally in north Bengal and said several BJP leaders had made statements that the forces should shoot to kill.

Five persons died in two separate incidents of firing at Sitalkuchi on April 10 when polling was under way at in the Assembly constituency. At Jor Pakti village in the Assembly seat, the CISF personnel opened fire killing four villagers. According to the district administration, the Central forces fired in self-defence when the people tried to snatch their weapons.

At a public meeting in the day, Prime Minister Narendra Modi blamed Ms. Banerjee for the violence which led “mothers losing their sons’ in Cooch Behar.

“The entire thing was planned by Home Minister Amit Shah and the Prime Minister was aware of the situation,” Ms. Banerjee retorted.

Former State BJP president Rahul Sinha, who is contesting polls from Habra in north 24 Parganas, said there was “no big issue if eight instead of four people were killed and those killed were terrorists trying to disrupt the polling process”.

“Will you vote for those firing upon the people or for working for the people,” Ms. Banerjee asked at another rally, urging the people to reply to the bullets with ballot.

Earlier in the day, the TMC lodged a formal complaint with the office of the Chief Electoral Officer against the remarks made by Mr. Ghosh.

A delegation comprising senior leaders of the Samyukta Morcha also visited the office of the Chief Electoral Officer and raised concerns about the deaths at Sitalkuchi. The delegation led by Left Front chairperson Biman Bose also demanded action against Mr. Ghosh. Mr. Bose expressed surprise that there was no video evidence of the security forces being attacked, or their weapons being snatched, as claimed by the Election Commission of India.