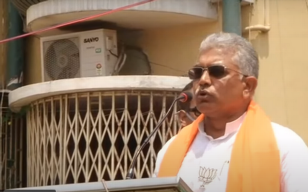 “The kind of naughty boys who got shot in Sitalkuchi in Cooch Behar won’t remain in Bengal. This is just the beginning,” says Dilip Ghosh.

West Bengal Bharatiya Janata Party (BJP) president Dilip Ghosh on Sunday courted controversy by warning that “there will be Sitalkuchi cases in various places” if anyone took the law into their own hands.

“Where have so many naughty boys come from? The kind of naughty boys who got shot in Sitalkuchi in Cooch Behar won’t remain in Bengal. This is just the beginning. ….Those who take the law into their own hands will be dealt with in a befitting manner… If they want to fight, then they have seen what happened at Sitalkuchi. There will be Sitalkuchi cases in various places. So be careful,” the State BJP president said while addressing a public meeting at Baranagar in North 24 Parganas.

Mr. Ghosh, who is no stranger to making outrageous comments, said that those who thought that the guns carried by the Central forces were “just for show” were now realising the “strength of the guns”.

Mr. Ghosh accused Ms. Banerjee of inciting violence and demanded that the Election Commission prevent her from campaigning.

The remarks drew condemnation from different political parties, including the Trinamool Congress (TMC) and the Left parties.

“We have always said that the BJP is a fascist party, and Dilip Ghosh’s comment has proved the point…I have no words to condemn it,” TMC MP Saugata Roy said.

Communist party of India (Marxist) leader Sujan Chakraborty said that Mr. Ghosh did not understand the meaning of democracy and had “no proper conception of human rights”.

Five persons were killed in two separate incidents of firing at Sitalkuchi at Cooch Behar during the fourth phase of polling on April 10. Four persons died when Central forces opened fire at booth number 126 at Jor Patki village in the Sitalkuchi Assembly segment.

While the administration and security forces said that the personnel fired in self-defence when the mob tried to snatch their weapons, Chief Minister Mamata Banerjee blamed Union Home Minister Amit Shah for the violence and called the incident a “genocide”.