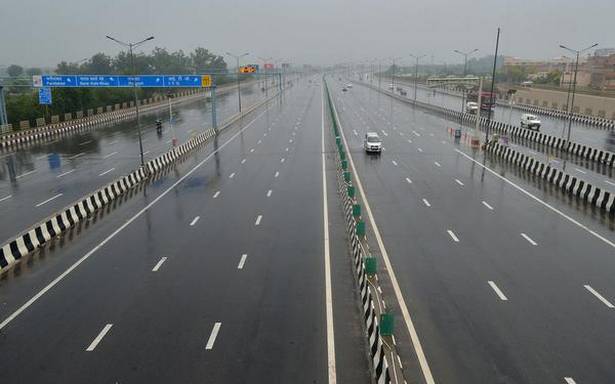 Delhi roads wore a deserted look on Saturday following the weekend curfew imposed by the city government in a bid to curb the rising number of COVID-19 cases.

The curfew came into effect across the Capital from 10 p.m. on Friday and will remain in force till 5 a.m. on Monday. To ensure strict compliance with the restrictions, the Delhi police stepped up patrolling, erected barricades and cautioned citizens of legal action if they stepped out of their homes without any reason.

On Sunday, however, devotees will be allowed to visit gurdwaras to be able to observe Prakash Purab of Guru Gobind Singh, according to the Delhi Disaster Management Authority (DDMA).

On Friday evening, a senior police officer said barricades were put in place across several locations in the city and especially at arterial routes to check vehicular movement and ensure that no person was moving unauthorisedly during the curfew period.

Deployment of personnel has been increased in several police districts for the entire 55-hour curfew period to ensure that the order is not violated and people did not venture out unnecessarily.

“No major violations were reported by any of our 40-45 odd enforcement teams that kept a watch during the day. Rain and cold also contributed to keeping people indoors,” said a south Delhi district officer.

Roads in many parts of the city remained empty and marketplaces fell silent following the curfew. Many DTC buses were seen plying empty and bus stands too wore a deserted look.

In view of the surge in COVID-19 cases due to the Omicron variant, The Delhi government had announced the weekend curfew on Tuesday.

“A weekend curfew has been imposed to minimise the spread of the coronavirus in Delhi. Visit the hospital only if you have severe symptoms. Treatment is possible under home-isolation. Wear a mask and follow all the COVID-related protocols,” Delhi Health Minister Satyendar Jain tweeted on Saturday morning.

During the curfew, only those involved in essential services and those facing emergency situations are allowed to step out of their homes while others venturing out have to produce e-passes issued by the government or valid identity cards if they fall under the list of exempted categories.

There were some complaints regarding the issuance of e-passes during the curfew and the National Restaurant Association of India said it might be compelled to halt home deliveries due to the problem. Following the NRAI tweet, Chief Minister Arvind Kejriwal promised to look into the matter.

Officials involved in essential and emergency services are included in the exempted category and can move out by showing their identity cards. Individuals can apply for an e-pass for the weekend curfew and the night curfew on weekdays on http://www.delhi.gov.in.

During the weekend curfew, only shops dealing in essential items such as groceries, medical equipment, medicines will be allowed to open.

The DDMA is scheduled to meet at noon on Monday to assess the COVID situation amid surging daily cases and more restrictions are likely to be announced, according to government sources.

“Anyone having any kind of emergency like going to a hospital etc. will be allowed to move. We request the citizens not to come out of their homes without any reason during the curfew and to follow COVID-appropriate behaviour,” Delhi Police public relations officer Chinmoy Biswal had said on Friday.