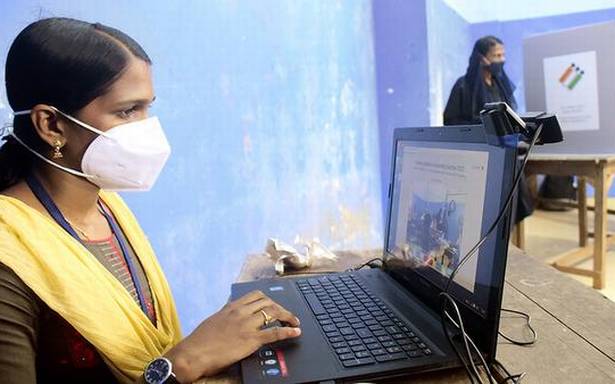 Over 2,000 people, including Akshaya entrepreneurs, carry out the task

The webcasting facility operated by the Information Technology Mission ensured flawless surveillance of 1,828 polling booths, including hypersensitive and vulnerable ones, in Kozhikode district on Tuesday. Along with the IT Mission team, District Collector Seeram Sambasiva Rao was also present at the district-level control room to monitor the live visuals and give instant instructions to the team members.

The City and Rural police were given two dedicated control rooms for viewing the live visuals from various hypertensive and vulnerable booths in Kozhikode district. High-speed Fibre to The Home (FTTH) internet service and superior quality webcams helped the monitoring teams to have an uninterrupted surveillance experience covering the whole district.

“We had prepared for the day with multiple trial sessions under the District Electoral Officer. Apart from the ground-level staff, who handled the power supply and connectivity jobs, there were nearly 2,000 people, including Akshaya entrepreneurs and supervising team, who stood by us to successfully complete the task,” said C.M. Midhun Krishna, District Nodal Officer for Webcasting. He said the laptops and webcams used for the webcasting initiative were all brought by Akshaya entrepreneurs.

In Kozhikode district, there were 43 critical booths and 499 vulnerable booths which demanded high security and surveillance measures. There were also 32 booths facing threats from Maoist activists. Considering the safety issues, 7,234 police officials, including those from the paramilitary and armed forces, were present in the district. Video cameras were used to record visuals from 209 booths where webcasting was facility was unavailable for technical reasons.

IT Mission officials said the recorded visuals from various booths would be sent to the State election authorities.

In case of any complaints related to the poll proceedings, the collected visuals would be examined by the higher authorities as digital evidence, they said.