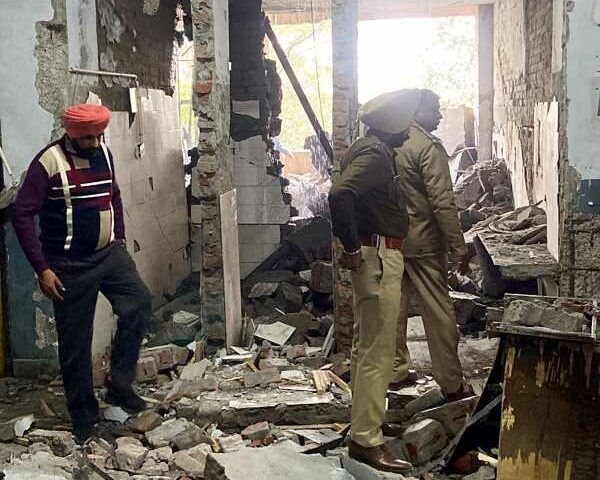 ‘Security should be outside the court and not inside.’ One man was killed and six seriously injured in the bomb blast inside a court in Ludhiana on Thursday, December 23, 2021.

The Punjab police stated that the bomb was set off by former head constable Gagandeep Singh, who was dismissed from service. He was killed in the blast.

Jaswinder Singh Multani, a member of Sikhs for Justice which is banned in India and allegedly linked to this blast, has been arrested in Germany.

Advocate K R Sikri is a former President of the Ludhiana District Bar Association. “The Punjab police are good enough to provide security though there may be some black sheep,” Advocate Sikri tells Rediff.com‘s A Ganesh Nadar.

Sir, were you in court on the day of the bomb blast?

The bomb blast occurred at around 12.15 pm on the second floor of the court complex. I was in court at that time on the 3rd floor.

When we heard the explosion, nobody knew what exactly had happened.

Some thought it was a gas cylinder (explosion). People started running around.

Later we came to know that it was a bomb blast and it had happened on the second floor.

What security measures are there in the court?

There is security at the main gate, but as a lot of public comes in through that gate, it is difficult to maintain close scrutiny on everyone. Never before has anything like this happened inside the Ludhiana court. This is the first time this has happened here.

They already have X-ray machines to check bags. Lawyers are not frisked, but the public coming in is frisked at the gate.

They should increase the number of policemen in this court as it is a very large complex.

Is the state police capable of providing security? Or would you like central forces to provide security in the court?

The Punjab police are good enough to provide security though there may be some black sheep.

Do you think this explosion has anything to do with the assembly elections in Punjab next year?

It could be, to create panic among the public.

Apart from lawyers and clients, do other people come to court?

Some clients come with their witnesses; some litigants bring other people with them.

Lawyers will have their identity cards, how do the public come into the court complex now?

Common people also have to show their identity cards to the security staff when they come in.

People who do not have a case in court can also come in. Was this attack targeted at a particular individual?

I cannot say that as the matter is under investigation. That the police will find out.

Has court attendance come down after this attack?

The bomb blast occurred on the 23rd and 24th was the last working day.

Lawyers abstained from work that day because of the panic-like situation. The court will open on January 3.

Is the court planning virtual hearings of cases?

There is no such plan.