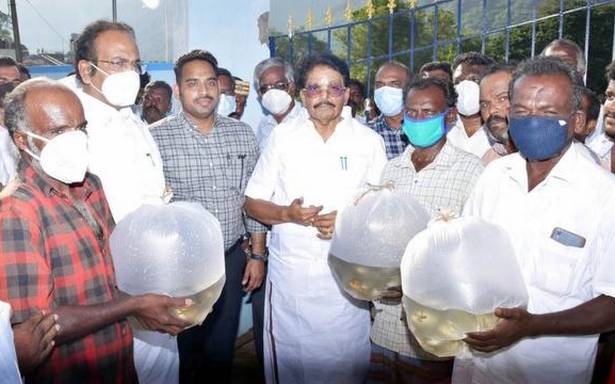 Water from Pilavakkal Periyar dam, Kovilar dam and Sasthakoil dam was released for irrigation in various taluks of Virudhunagar district.

Revenue Minister K.K.S.S.R. Ramachandran and Industries Minister Thangam Thennarasu opened the sluices of Pilavakkal irrigation system at Watrap on Sunday. Since there is a low storage of 128.40 mcft of water in Periyar dam and 40 mcft in Kovilar dam (water from both dams irrigates ayacut under Pilavakkal irrigation system), as of now 150 cusecs of water would be released for five days.

The system has a total of 8,500 acres of ayacut that is served directly through the channels and indirectly through 40 irrigation tanks located in 17 revenue districts in Watrap, Srivilliputtur and Sivakasi taluks.

Water from Sasthakoil dam was released by Collector J. Meghanath Reddy in the presence of Rajapalayam MLA S. Thangapandian.

Sasthakoil tank serves 3,130 acres of ayacut through 11 tanks. The officials have planned to release 50 cusecs of water for eight days as the dam, which has been overflowing for the last few days, has only 36.47 mcft of water.

The Ministers said based on the rainfall in the catchment areas of the three dams and inflow, water release would be continued to fill up all the system tanks. Farmers have been asked to use the water judiciously.

Though water was released in a similar situation last year, subsequent monsoon rain helped water reach all the 40 tanks under Pilavakkal irrigation system, according to an official.