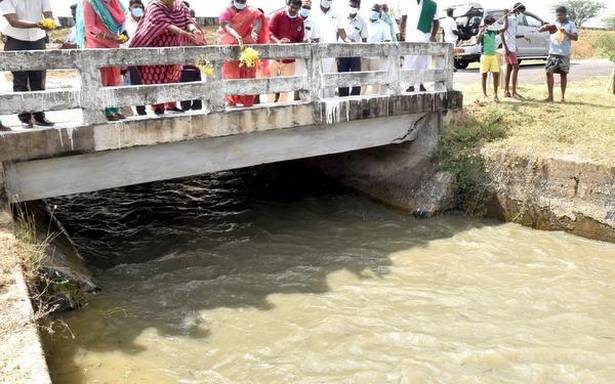 Water has been released for irrigation from Sidhamalli reservoir at Karkudi village in Ariyalur district.

The reservoir, commissioned in 1988, irrigates about 5,080.62 acres of land including 1,179.02 acres of wetlands in Naduvalur (East), Irugaiyur, Karaikurichi, T. Pazhur, Kodankudi, Thirupuranthan, Idankanni and Cholamadevi villages, said Collector P. Ramana Saraswathi after opening the sluices of the reservoir canal on Friday.

Situated in Udayarpalayam taluk of the district, the reservoir has a capacity to hold 226.80 million cubic feet (mcft) of water. Its maximum storage level is 4.75 metres.

There are three head sluices and water is being released to Karkudi Therkkueri from sluice 1; to Kovathadai Eri from sluice 2; and to Thirupuranthan Big Tank from sluice 3.The surplus flows from the reservoir drains into Kollidam via Sidhamalli Odai.

As the water level at the reservoir was at 207.91 mcft on January 4, a proposal to release water from the dam was sent to the government and a GO was issued subsequently for release of water. Accordingly, water will be released on turn basis to ayacut areas from the reservoir for 52 days till March 21.

PWD Executive Engineer Geetha and other officials were present.