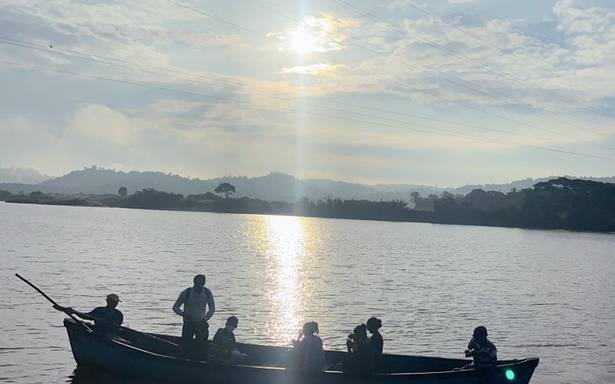 Unseasonal rains as well as the barrage-cum-bridge at Adyar Padavu across Netravathi river appear to have dashed the hopes of Pavoor Uliya Kudru residents who used to build a makeshift footbridge after every monsoon to reach the mainland, at Adyar on NH 75.

Members of around 40 households in Kudru (a river island) pool in money and get some donations to build the footbridge every year. Initially, they had spent about ₹15 lakh for steel pipes and wood planks under the guidance of Fr. Jerald Lobo, parish priest of Infant Jesus shrine on the Kudru. While boats are the only option to cross the swollen Netravathi during the monsoon, they conceptualised a makeshift bridge when rains recede. They would dismantle the bridge during the monsoon. This was after government agencies failed to address their demand for a permanent bridge.

When construction of the Harekala-Adyar vented dam-cum-bridge commenced this January at downstream Adyar Padavu, impounded waters of the cofferbund submerged the footbridge in March. Residents had to dismantle the bridge to save the structure.

“We hoped to rebuild the bridge after this monsoon, but the water level in the Netravathi is yet to recede,” said Stephen, who was rowing a boat to ferry Kudru residents from one bank to the other on November 22.

He said the exact situation would be known on completion of the vented dam impounding the water. If the water level is higher than the steel footbridge, residents may have to depend on boats alone, unless the government provides a permanent solution.

Fr. Lobo had earlier appealed to the district administration and local MLA U.T. Khader to address the issue.