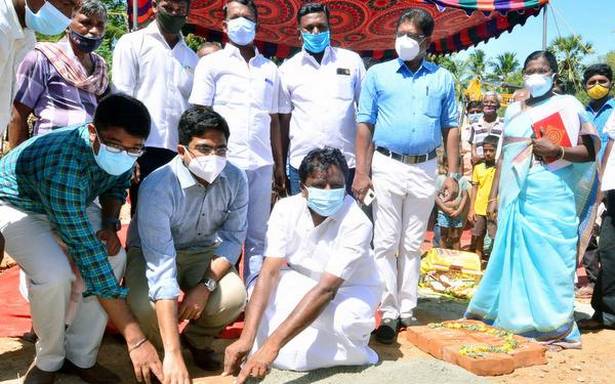 The Corporation, as part of ‘Smart City’ projects, has decided to create three washermen ghats at two places – Karuppanthurai and Vannarpet – at a cost ₹4.20 crore to save the Tamirabharani from getting polluted by laundry chemicals used by the washermen.

After inaugurating the work on laying a cycling track along a road in NGO Colony in Palayamkottai in the presence of Corporation Commissioner B. Vishnu Chandran on Monday, Mr. Vishnu laid foundation stone for these structures.

The Collector said that the Tamirabharani, the lifeline of four southern districts, should be protected from pollution of all sorts, including industrial and domestic drainage flowing into the perennial river. While implementation of the second and third phases of underground drainage system which envisages taking the drainage from houses to the effluent treatment plant before pumping it to the Ramaiyanpatti garbage yard, more surveillance should be put in place to completely check the dumping of meat and medical wastes. Moreover, steps were being taken to prevent people from washing their vehicles in the river.

In Tirunelveli, unstructured group of washermen were working in inadequate washing spaces along the river. The chemicals used for laundry leads to contamination of the river water. The construction of washerman ghat with 96 tubs would help in providing proper working space for the washermen and organising all washing activities in one place, the Collector said.

The waste water would be treated or made less damaging to the river and the environment by establishing proper effluent treatment plants. “The washerman ghat project aims to allocate specific locations for washermen so that effluents from there could be collected and treated before letting into the river,” Mr. Vishnu said. This project is likely to be completed by July 31, 2022.

The proposed cycling track with a width of two metres will be laid for a distance of 1.80 km between Lake Road and Annai Marriage Hall Road in ward 27 by August 31.