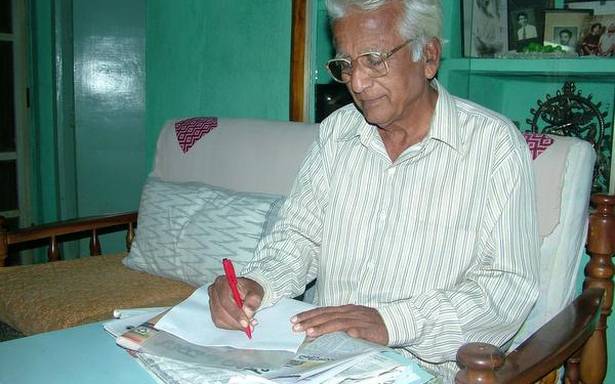 Vishwanath Baburao Patil, awarding-winning senior journalist, died in Bidar on Sunday. He was 85. He was suffering from age-related health complications, his family sources said.

He was a stringer for The Hindu for over two decades, covering Bidar district.

He was the founder editor of Daman, the first Hindi newspaper from Kalyan Karnataka region, that he started in 1969.

A graduate in journalism from Osmania University, he served as the District Information and Publicity Officer in Mysore State. He resigned from his post to start his own newspaper.

He served The Hindu from 1970 to 1997. His reports from the ground about the anti-Sikh riots of 1988 were noticed by the human rights commission that looked into the issue. Mr. Patil’s reporting of the flood and famine of the 1970s brought out the pain of the people in North Karnataka. He always campaigned for the development of the backward districts of the north eastern region. D.M. Nanjundappa Commission for studying the regional imbalance quoted from his articles in some chapters.

He edited Daman, the Hindi newspaper, with a great local focus and took a stand with a pro-people outlook. He was feared and respected widely across Kalyan Karnataka region for his investigative stories and fierce editorials.

Among the various awards he received were the Rajyotsava Award and the R.H. Kulkarni Trust Media Award for life-time achievement.

Always full of life, he would greet guests with a smile. He worked for a decade to build and stock a library in his native village of Hakyal near Aurad. He created the Ekalavya Endowment that built a swimming pool for the village children. In his early days as a publisher, his little finger was crushed in the printer barrel wheel. “I am the Ekalayva of journalism. I learnt it by sacrificing my finger,”’ he would say, displaying his hand, and laugh about it.

His final rites will be held at the crematorium near the Jharni Narasimha temple in Bidar on Monday, said his son Mahesh Patil.