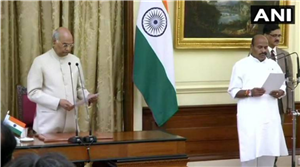 Virendra Kumar said that he will put in his best efforts to realise Prime Minister’s Narendra Modi’s dream of a “New India”. Six-time Lok Sabha MP from Madhya Pradesh Dr Virendra Kumar assumed office Thursday as the Minister for Social Justice and Empowerment. Ministers of State A Narayanswamy and Pratima Bhowmik also took charge along with him.

Kumar said that he will put in his best efforts to realise Prime Minister’s Narendra Modi’s dream of a “New India”.

During his long tenure in the Lok Sabha, Kumar has been a member of numerous standing committees, including ones on Labour and Welfare, and Welfare of Scheduled Castes and Scheduled Tribes.

Kumar has served as Union Minister of State for Women and Child Development and Minority Affairs.

He has also been the Deputy Whip in the Lok Sabha for the BJP between 2009-14 and the Chairperson of the Standing Committee on Energy.

An RSS worker from an early age, Kumar participated in the Jayprakash Narayan movement in 1975 against the Emergency. He was imprisoned for 16 months in Sagar and Jabalpur jails.

He has played an instrumental role in the Gau-Seva Sangh Sanstha in Sagar in Madhya Pradesh for cow protection and is an advocate of vegetarianism and against the consumption of alcohol and tobacco.