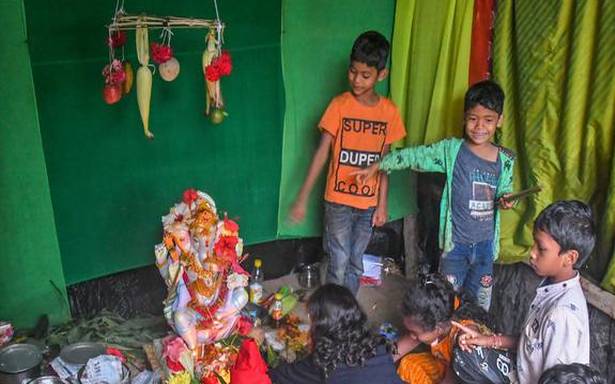 For the second year in a row, people celebrated Vinayaka Chaviti in a low-key manner in Visakhapatnam. Celebrations were limited to homes, preparing special dishes and visiting temples. However despite the ban on public celebrations, several youth and colony associations set up Ganesh pandals in their localities for a day or two.

Since early morning of Friday, Sampath Vinayaka Temple at Assilmetta,. Sri Durga Ganesh Temple at Seethampeta and Lakshmi Ganapathai temple on the NH near Thatchetlapalem and a few other Ganesh temples near Krishna College, Akkayyapalem, Gajuwaka and in some other areas saw a steady stream of devotees. City roads wore an empty look till evening.

A few colony youth and associations set up pandals on the side of the roads and organised pujas. Loudspeakers and music were not arranged keeping in view the strict orders. A few organisers set up pandals replicating the various welfare schemes of the State government. Most of these idols set up in pandals were immersed by the evening or by Saturday morning.

Right from 4 p.m. on Friday, the Beach Road stretch from Peda Jalaripeta to Rushikonda saw a very huge rush with hundreds of people with their children, thronging it for the immersion of Ganesh idols. Peda Jalaripeta, AppuGhar, Jodugullapalem, Sagar Nagar and a few other points witnessed a large number of people carrying various shapes and sizes of idols and chanting ‘Ganapati Bappa Moriya’.

Several children were seen enthusiastically taking part in the immersion by carrying clay idols on their head. Though the police have started to close entry of public to Beach Road from 5.30 a.m. on holidays, scores of people continued to flock Beach Road for immersions till evening. Police allowed them asking them to return soon. Because of the huge crowd, the social distancing norms were thrown to the wind.